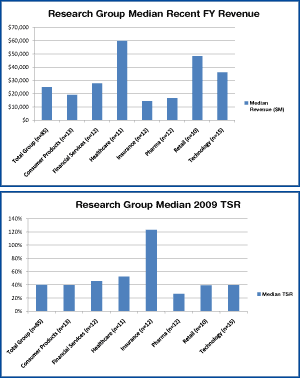 The component companies are large industry leaders. The total sample had median revenue of $25B, market cap of $37B and Total Shareholder Return (TSR) of 40% during 2009. The charts below include summary statistics by industry group. Practices at these leading companies are scrutinized closely by shareholders and the shareholder advisory groups. The responses of these companies to the financial strains in the economy during 2009 gives valuable insight into current practice and changes we expect to see in 2010.

Highlights of our research results for the entire sample are below. Future CAP-Flashes will focus on particular industry groups and important topical areas, such as annual and long-term incentive design trends.

Outside of Financial Services, few companies reported changes to compensation strategy—i.e., the targeted pay positioning for executives and the targeted pay mix. Most stayed the course despite the challenging economic conditions in 2009.

Within the Financial Services group, most companies reported changes to compensation strategy, responding to their experience under TARP. Changes within the financial services industry include different pay mixes—examples include:

We expect Financial Services companies to continue to re- evaluate their compensation strategies as they exit TARP and emerge from the financial crisis and enter a more steady state.

Most companies did not make significant changes to their peer groups used for compensation benchmarking. Of those that did make changes, the majority of changes reported were primarily due to M&A activity in the Consumer Products, Insurance and Pharmaceutical industries. Others tweaked their selection criteria to focus more on companies in their industry and within a reasonable size range.

Senior executive base salary actions continued to be restrained by the poor economy in 2009. Slightly more than half the sample did not increase or reduced salaries in 2009. Industry groups where salary freezes and reductions were widespread included Consumer Products, Health Care, Retail and Technology. Industries where salary increases were more common included Insurance and Pharmaceuticals. Merit increases were generally in the range of 2 – 3% when they were awarded.

Overall, 34 companies (40% of the full sample) disclosed making a change to their AIP design in 2009 or for 2010. While there was not a universal trend in the type of design changes being made, most companies are dealing with challenges in the goal setting process and maintaining meaningful performance linkages, linking rewards to the company’s ability to pay, and appropriately considering the impact of overall market conditions. In a nutshell, companies are trying to maintain a precise pay and performance calibration while also allowing for appropriate recognition of significant executive accomplishments.

The breakdown of reported AIP changes is as follows:

Of the companies that changed their performance metrics and/or the mix of those metrics, a majority created a stronger linkage to corporate performance results and strategic priorities to support business changes forced by economic conditions. For example,

Computer Sciences: Reduced the number of performance criteria to focus on key financial goals consistent with the company’s business strategy

Merck: For 2010 incentive pool will be determined solely on company performance (as reflected by company scorecard)

There was no distinct trend in the changes made to the financial metrics used, though many changes included more emphasis on earnings, and to a lesser degree, revenue growth. Companies in the Insurance, Pharmaceutical and Retail industries made the most changes to metrics.

Another approach used by some companies includes use of a scorecard, which typically provides parameters for financial, operational, strategic, customer, and/or individual performance measurement. BNY-Mellon adopted such an approach to determine annual bonuses; and for 2010 Merck disclosed new incentive pool funding based on a company scorecard (solely company performance).

Among the companies that changed the mix of long-term award vehicles, two trends emerged. More than 50% of companies reporting a change in long-term award mix increased the emphasis on performance-based awards. Increased use of time-based awards – particularly among companies that had difficulty setting long-term financial goals during the recent period of economic uncertainty—was also common, but much less so. Finally, a few companies used options to a greater extent citing the difficulty in setting goals and attractive stock prices.

Changes in long-term performance metrics were widespread. 25% of the total sample reported changing long-term incentives by adding new metrics; an additional 4% reduced the number of metrics used. Both relative and absolute TSR were selected as metrics by a number of companies. Return on equity/capital, revenue growth and cash flow were also popular choices.

Note: Percentages do not add up to 100% due to multiple responses

Treatment of Dividend Equivalents and Other Plan Changes

Absent regulatory constraints, we did not see wholesale changes in 2009. Companies tended to stay the course in 2009 as the economic cycle bottomed out and the first signs of a recovery began to appear, but several clear trends did emerge. These include continued restraint on base salary increases, refinements to annual incentive and long-term incentive plan metrics and greater use of performance based long term incentives. These are all shareholder friendly developments that should improve the alignment between executive compensation and shareholders. We expect companies to continue to re-examine their programs as the economy improves and shareholders continue to demand performance and compensation program alignment.