Note: Due to multiple responses, does not add up to 100%.

Note: Financial Services industry is excluded since most companies in our study do not disclose target bonus opportunities for the Named Executive Officers.

Of the companies that changed or plan to change the performance metric:

Several companies indicated that their rationale for changing annual incentive metrics was, in large part, to better align executive pay with the business strategy and shareholder interests:

Similar to 2011, Revenue, EPS, Cash Flow and Operating Income continue to be the most prevalent metrics used across all companies, although we see some variation in metrics by industry. In 2013, 30% of companies disclose using two (2) metrics in their annual incentive programs, 29% use three (3) metrics, and 12% of companies use four (4) or more metrics. Approximately 85% of these companies use a profit-based metric in combination with Revenue and/or Cash Flow.

Refer to the chart below for the three (3) most prevalent metrics by industry: 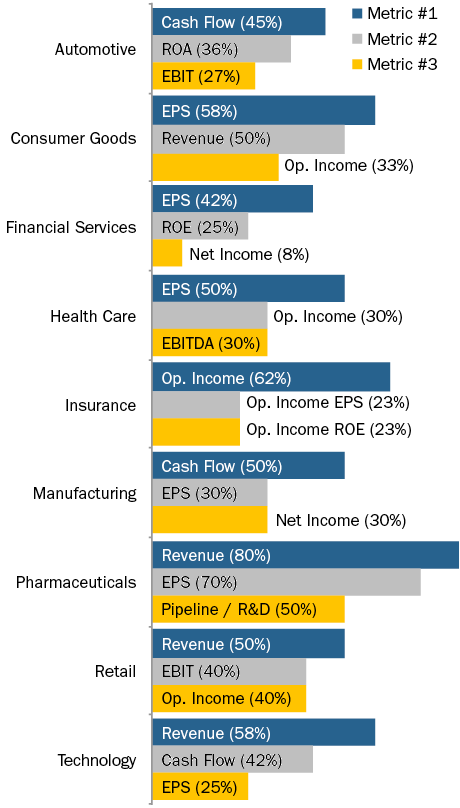 Similar to 2011, approximately 95% of companies awarded bonuses to their Named Executive Officers for 2012 performance. Overall, the median CEO bonus was 112% of target compared to 133% in 2011, indicating that 2012 performance generally exceeded par, but was not as strong as 2011 performance. Median 2012 bonus payouts in the Health Care, Insurance, Pharmaceutical and Retail industries exceeded target by 15 – 40 percentage points while payouts in the Automotive, Consumer Goods, Manufacturing and Technology industries were closer to target.

Companies are continuing to refine their annual incentive program to ensure executive pay is aligned with the Company’s business strategy and key success indicators. These recent trends also indicate that companies are modestly increasing CEO pay through the bonus opportunity and award leverage. Actual payouts for 2012, however, indicate stronger performance goals and moderately above target payouts, yet lower than the previous year. Revenue, EPS, Cash Flow and Operating Income continue to be the most prevalent annual incentive plan metrics with a majority of companies using two (30%) or three (29%) metrics to reward executives for company performance. We expect companies to continue to refine metrics and performance goals / leverage linkages in the annual incentive plan as shareholders and proxy advisory firms scrutinize the executive compensation program.