In 2014, the four most common CEO perquisites were: personal use of corporate aircraft (56%), automobile allowance (31%), personal security (29%) and financial planning (24%). While the prevalence of personal use of corporate aircraft was generally flat from 2012 to 2014, the prevalence of automobile allowances, personal security and financial planning decreased sharply (approximately 30– 40%) over the past two years. 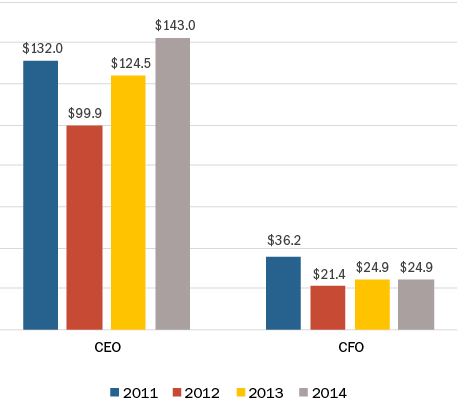 Perquisites represent only a small portion of an executive’s total compensation, yet are often highly scrutinized. Shareholders prefer that pay be delivered in performance-based vehicles instead of through perquisites. Over the past few years, a number of companies changed their perquisite programs in reaction to increased shareholder scrutiny and specific feedback received from shareholders or proxy advisory firms. However, given fairly consistent prevalence over the past 2 years, data suggests that changes to company perquisite programs may have leveled off. PNC was the only company making a change to a perquisite program in our sample for 2014, increasing their annual perquisite limit from $10,000 to $20,000 for each NEO, other than for the CEO.

Note: Percentages do not add up to 100% due to multiple changes by companies