CAP set out to see if CEO pay levels among Wall Street Banks have returned to pre-crisis levels (i.e., 2007). In addition, we reviewed other financial sector firms1 to see how CEO pay levels have moved over the same time period. Hedge funds and private equity firms were not included in the review.

For reference, comparisons were also made to large non-bank companies across other industries ("Fortune 30"). In total, 65 companies were examined. 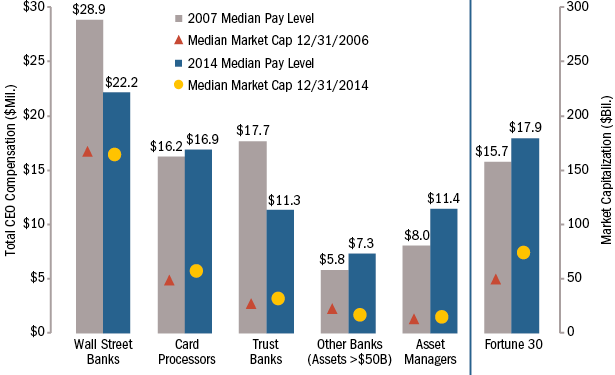 Change in Compensation Since 2007 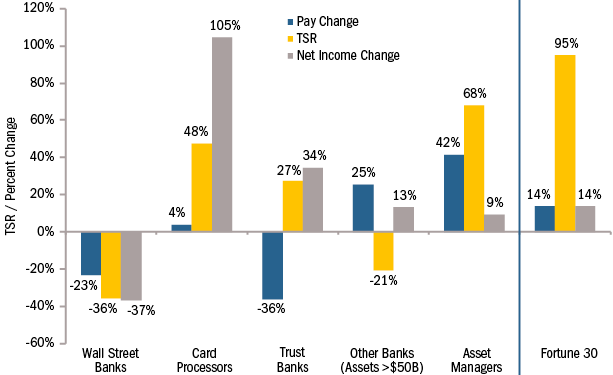 By 2014, most of the groups of companies studied have recovered from the financial crisis, as evidenced by increases in net income and TSR versus their 2007 results (Chart 2). It appears that companies have used restraint in making corresponding increases to CEO pay, recognizing that (1) shareholders sustained significant losses during the crisis, (2) material increases in pay should follow improved results for shareholders, and (3) public and regulatory scrutiny on financial company pay practices has been unrelenting.

As we look ahead, for both financial and non-financial firms, we expect continued sensitivity to executive pay levels, especially CEO pay levels. While companies have recouped losses from 2007, there will be ongoing pressure to demonstrate that CEO pay is aligned with performance, in terms of financial success and shareholder returns.

1 Card Processors (that are also Bank Holding Companies), Trust Banks, Other Banks (with assets >$50B), and Asset Managers. For a complete list of companies in each category, see Appendix.