Annually, Compensation Advisory Partners (CAP) evaluates pay levels for Chief Financial Officers (CFOs) and Chief Executive Officers (CEOs). This year, the analysis is based on a sample of 100 companies with median revenues of $13 billion. For more information on criteria used to develop the sample of companies, please see Appendix. 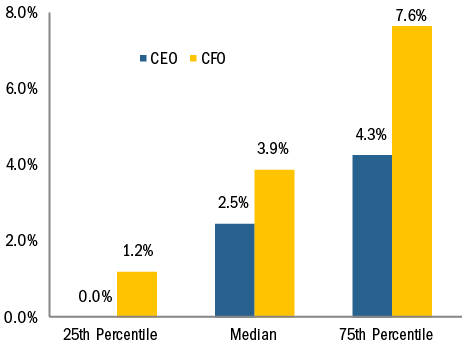 Based on our findings, the median rate of increase in actual total direct compensation levels for both CEOs and CFOs was approximately 2% for 2015. The median increases over the last two years ranged between 3% and 5%. The lower increases in total compensation for 2014-2015 are partially a result of no increase in bonuses, at median, and only slightly higher single digit increase in long-term incentives.

Differences by industry were more pronounced when looking at actual total direct compensation. There were more decreases in CEO or CFO total actual compensation in 2015 compared to 2014, primarily driven by weaker company performance and the annual incentive award paid as a result of performance. The Energy industry was the single industry where both CFOs and CEOs experienced similar declines in compensation, at median. Some of the largest increases in compensation levels were observed in Consumer Discretionary, Healthcare and Materials.

The structure of the overall pay program (salary, bonus, LTI) has remained largely unchanged since 2011. CEOs continue to receive less in the form of salary and more in variable pay components, especially LTI, than CFOs. 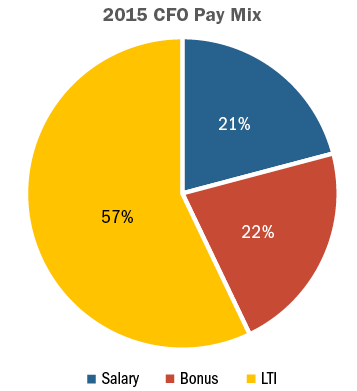 We have seen very little change in the type of vehicles used to deliver LTI awards. Overall LTI mix also remains similar to the past several years. The majority of companies continue to use two different vehicles to deliver long-term incentives to CEOs/CFOs with approximately a quarter of companies studied using all 3 equity vehicles (stock options, time-based stock awards, and awards under a performance plan)

Performance plans account for roughly 50% of LTI awards on average. The other half of LTI is delivered almost equally between stock options and time-vested restricted stock awards. The overall weighting of performance-based awards (performance plans and stock options) for both CEOs and CFOs continues to range between 75% – 80%.

2015 was not as strong a performance year as 2014. Median revenue growth was -1% (vs 6% in 2014), net income growth was -1% (vs 9% in 2014) and total shareholder return was -2% (vs 16% in 2014). Overall total pay increases were also smaller than in 2014, which we believe were directionally aligned with performance. While salary and long-term incentive increases for CFOs were slightly higher in 2015, actual bonus amounts were flat. This pattern was similar for CEOs in the study.

We expect overall pay mix to continue to emphasize the variable, at-risk components of pay. We also expect the current approach to delivering long-term incentives, with an emphasis on performance-based LTI plans to continue. In this era of increased scrutiny and Say on Pay, we anticipate that aligning pay outcomes with company performance will continue to be an imperative for companies and Boards.

Based on the screening criteria below, we arrived at a sample of 100 public companies with median 2015 revenue of $13B.