Among Early Filers with CEOs who held their position for at least two years (37 companies), actual total compensation in 2014 increased 15% from 2013. The increase in total pay was delivered mostly through the annual and long-term incentive awards, with median increases of 18% and 14% increases year over year, respectively.

Among the Early Filers, companies continue to provide modest salary increases to the NEOs. Salary increases for incumbent CEOs ranged from 0 – 5%. Approximately 50% of companies did not increase their CEO's salary in 2014. 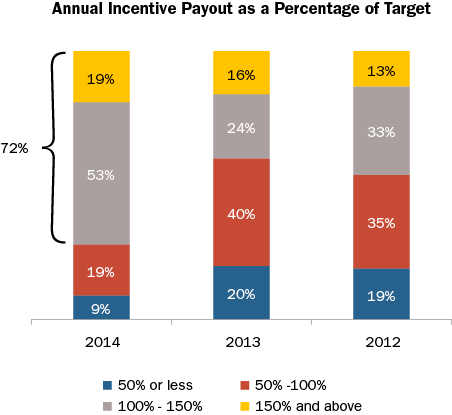 Median annual incentive payout as a percentage of target for all Early Filers was 111% in 2014 which was higher than the median in both 2013 and 2012.

The chart below illustrates all changes companies made to their annual incentive plan:

Note: Percentages add to greater than 100% due to multiple changes by select companies.

The use of time-based LTI (stock options and restricted stock) continues to be prevalent, yet performance-based LTI continues to play the strongest role in the overall LTI mix.

Approximately 50% of companies in our study made changes to their overall LTI program. Most changes involved the mix of vehicles, which continues the recent trend of increasing performance-based LTI and reducing the reliance on time-based long-term incentives. The table below indicates all changes made by the Early Filers:

Note: Percentages add to greater than 100% due to multiple changes by select companies.

Among the companies that changed their LTI mix, most increased the emphasis on performance-based LTI while reducing stock option use. The portion of LTI awarded in the form of time-based restricted stock remained relatively unchanged. Overall, nearly 90% of companies use performance-based LTI, 74% use stock options and 62% use time-based restricted stock. 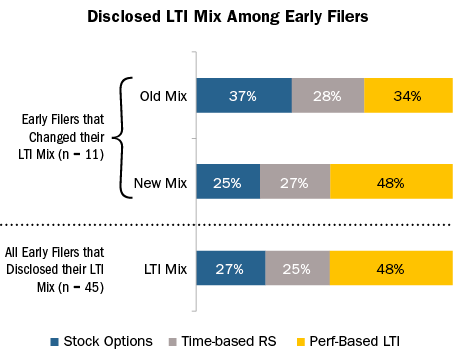 Among the Early Filers that grant performance-based LTI awards, approximately 60% use two or more metrics. The use of multiple metrics provides balance and rewards executives based on holistic performance.

Approximately two-third of companies use relative Total Shareholder Return ("TSR") as a performance metric. Companies incorporate TSR as a long-term incentive metric for multiple reasons including aligning with the shareholder experience, simplifying the goal-setting process and conforming to proxy advisory firms’ preference for TSR. Among the companies that use relative TSR as a standalone metric, it typically represents 25-50% of the total performance award. Some companies use financial performance (either absolute or relative) to fund the payout of the performance award and use relative TSR to modify the final payout, thereby incorporating it as an LTI metric but reducing its overall effect on payouts.

In 2015, 98% of Early Filers that released SOP results this year received majority shareholder support; most companies (approximately 75%) received greater than 90% support. Compensation program design changes can and do improve Say on Pay results! Among the companies that made changes to either their annual or long-term incentive plan in 2014 (n = 29), 97% received majority shareholder support with approximately 70% receiving greater than 90% support. However, making a change to the incentive program design does not guarantee shareholder approval of the executive compensation program.

When fundamental problems with the compensation program exist – such as high pay levels or misalignment with performance – companies may fail the SOP vote. Additionally, poor SOP results can be attributed to shareholders expressing dissatisfaction with other aspects of the company’s business, its management or TSR performance.

2014 annual incentive payouts among the Early Filers were higher than 2013 which, when combined with the rise in LTI award levels, resulted in a 15% increase in total compensation. We saw a big increase in the number of companies with at or above target bonus payouts, as well as higher performance among these companies. Nearly 65% of companies use TSR as a long-term incentive metric, suggesting that companies are trying to enhance alignment between executive pay and shareholder experience.

Companies continue to make changes to their annual incentive and LTI plans, with a strong focus on enhancing the pay for performance relationship through modification of the annual incentive metrics and/or the long-term vehicle mix. Among companies that changed their LTI vehicle mix, they tended to increase the role of performance-based LTI. Our experience suggests these trends are consistent with the broader market practice. While changes to the incentive plan will likely lead to a favorable Say on Pay vote, companies should be aware of that other factors may affect the vote.