2018 was a mixed performance year for the banks in CAP’s study. EPS and net income both grew significantly, due in large part to the reduction in the corporate tax rate under the Tax Cuts and Jobs Act of 2017. Operating income growth was also up in 2018, indicating that strong operating results also played a part in the increases in EPS and net income. At the same time, revenue growth in 2018 was slightly lower than revenue growth during the prior year. TSR declined for the one-year period that ended December 31, 2018, consistent with the overall market. In addition, TSR was lower for the three-year period that ended December 31, 2018, than for the prior three-year period that ended December 31, 2017. The chart below summarizes median performance results for the banks in CAP’s study:

In 2018, total direct compensation, including base salary, annual cash bonus, and awarded long-term incentives, among CEOs increased 7.8 percent versus 2017 at median. This is a smaller increase than in 2017 when total direct compensation for CEOs increased 11.1 percent at median. The smaller increase in 2018 is primarily due to changes in annual cash bonuses, which were mixed among this group and resulted in an increase of 1.5 percent at median. This is a shift from the period from the prior year when nearly all banks in CAP’s sample increased CEO bonuses, and the median increase was 16.3 percent. The chart below summarizes median changes in CEO pay for the group: 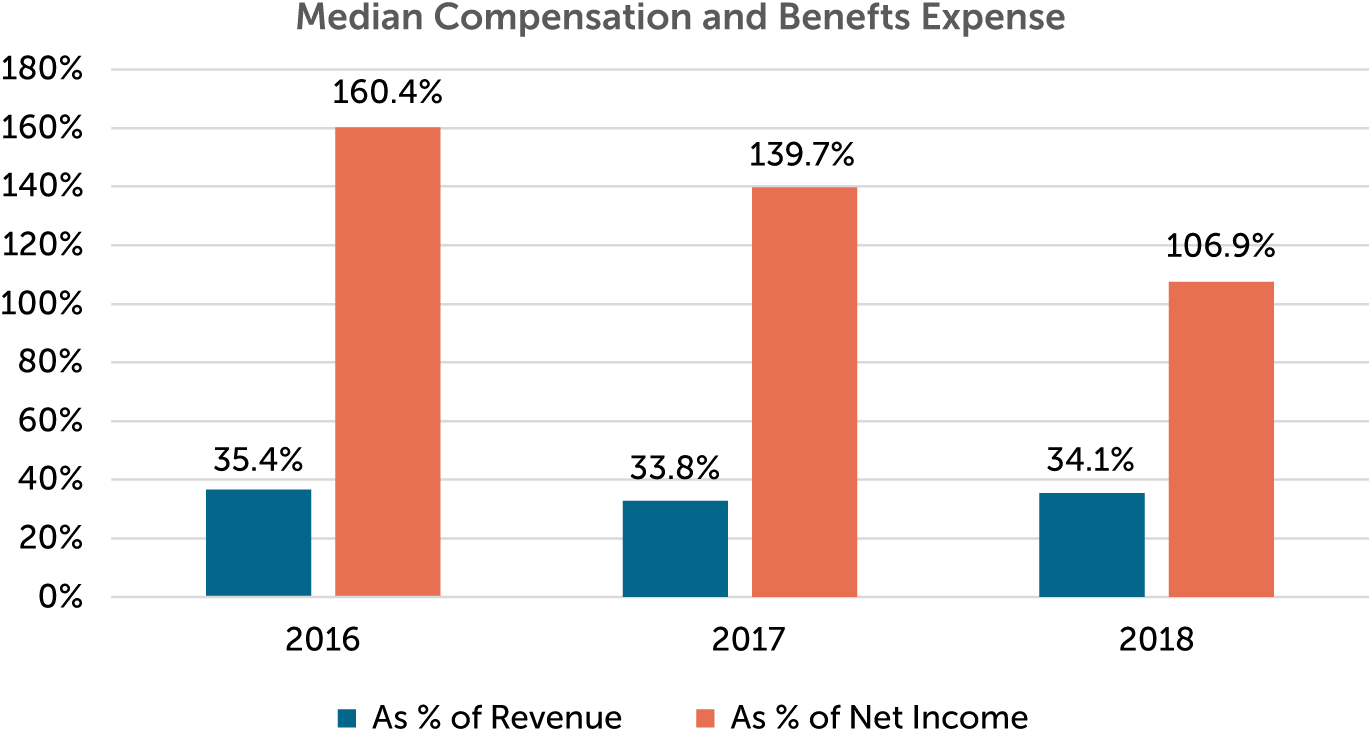 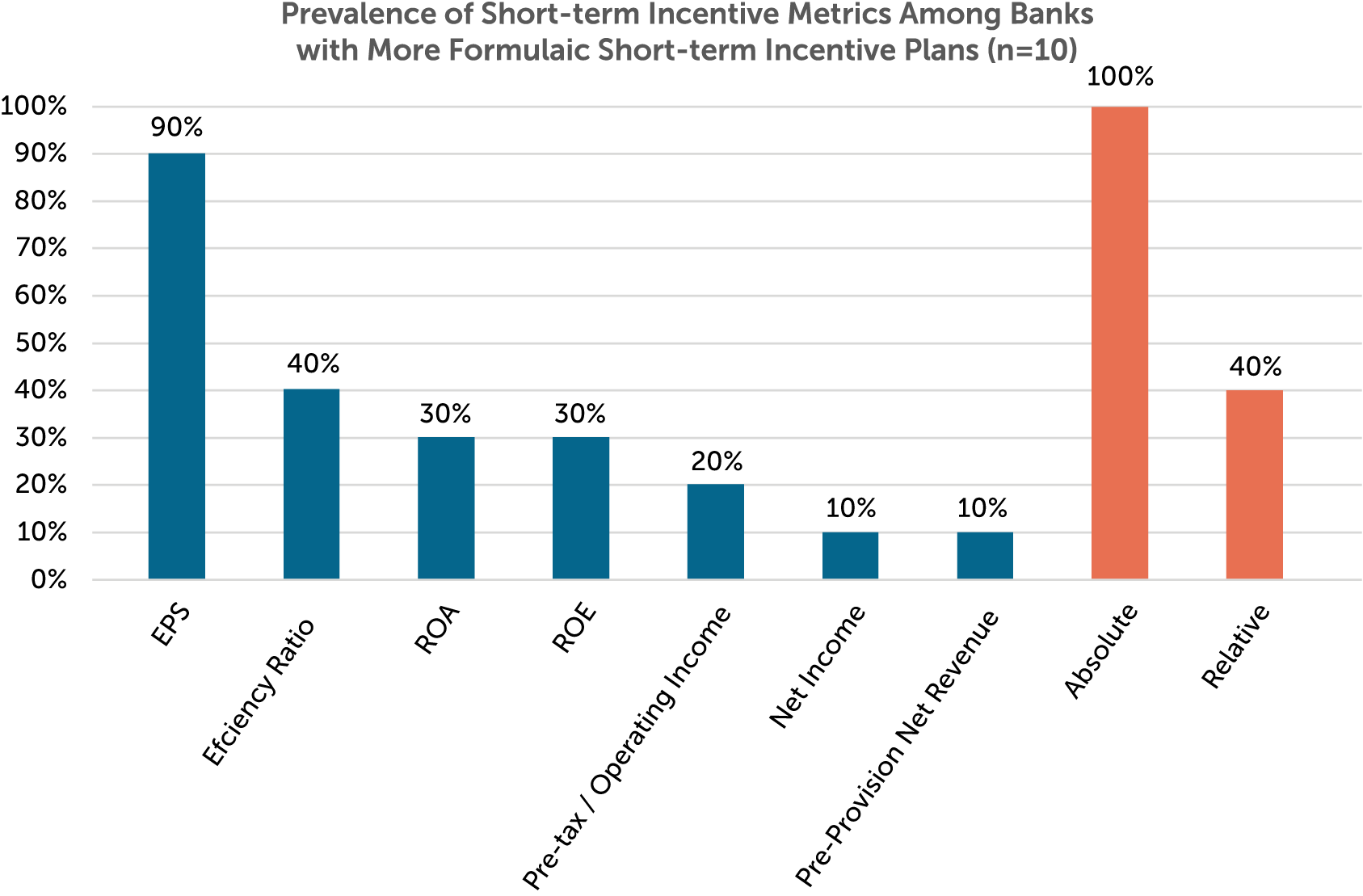 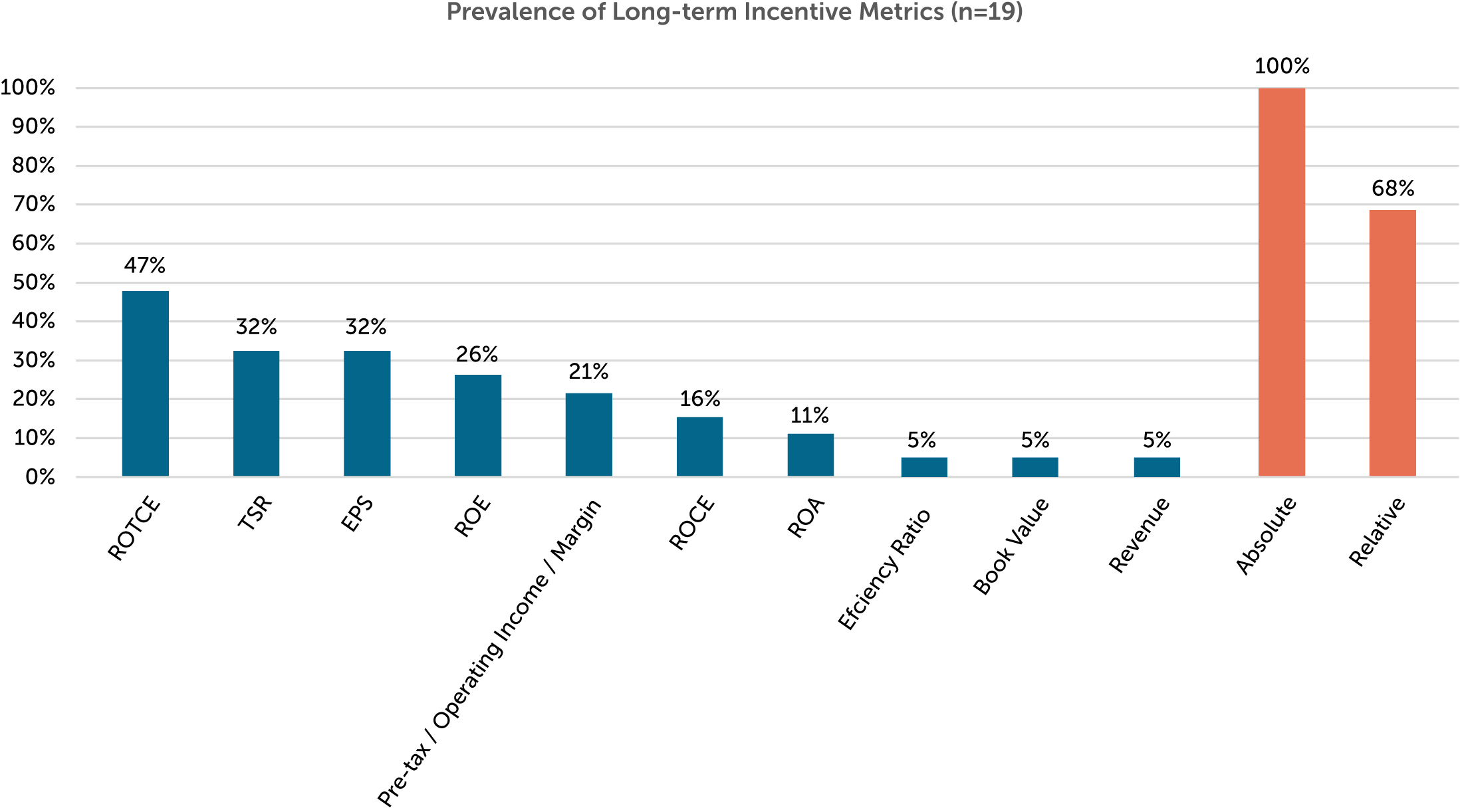 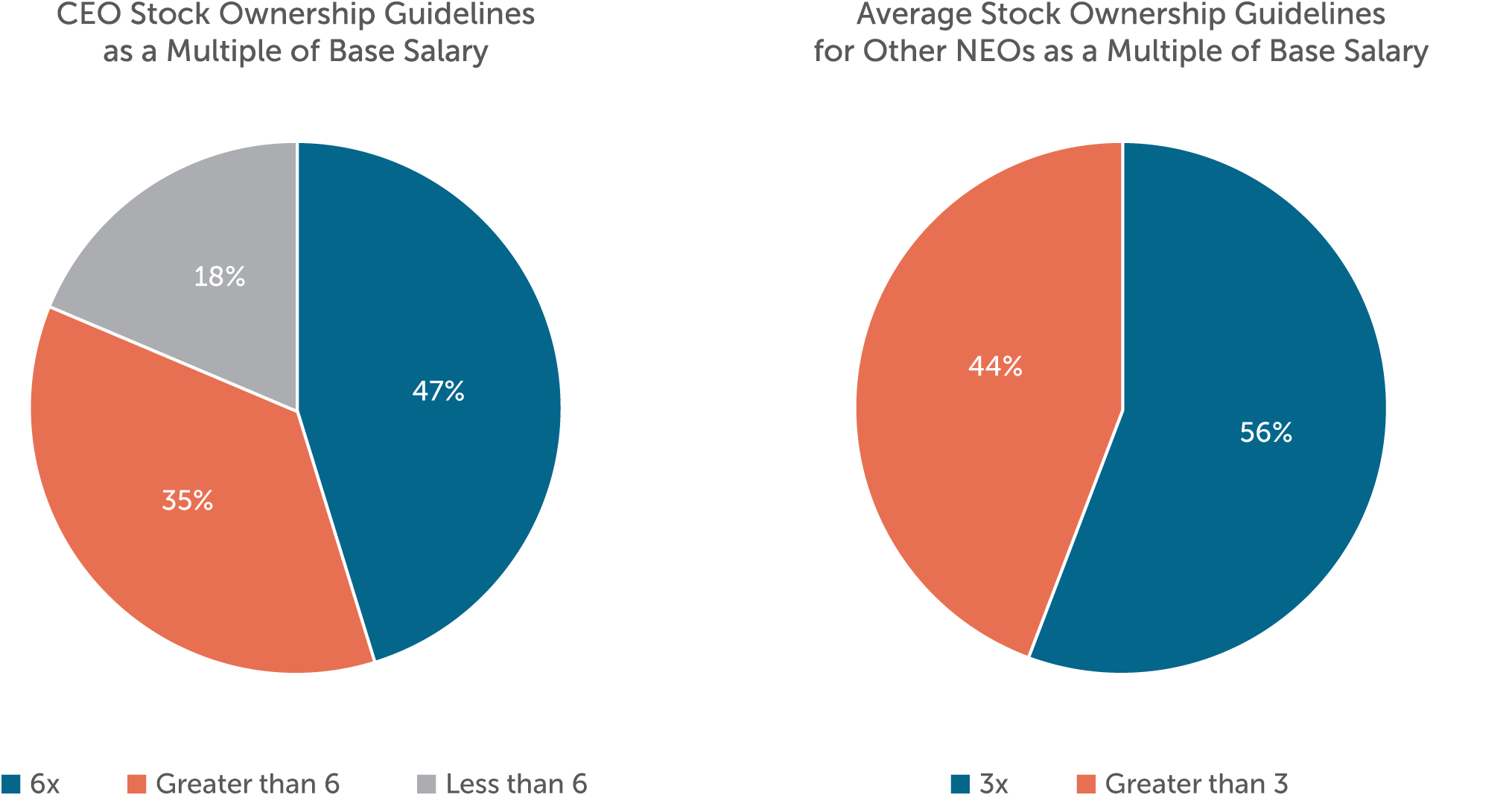 In the years following the 2008 financial crisis, several banks in CAP’s study, including the Money Center banks, adopted policies requiring NEOs to hold a portion of the net after-tax shares received from stock vesting or option exercises (“net shares”) until retirement or termination from the company or later. Many thought this trend would catch on throughout the banking industry; however, most smaller banks never adopted such policies. Of the companies in CAP’s study, 42 percent disclose policies of this kind. These policies typically require NEOs to hold 50 percent of net shares until retirement or one-year post-retirement.

In recent years, corporate diversity and inclusion have become a main area of focus culturally and for certain institutional shareholders. As a result, compensation and human resources committees are increasingly focusing on gender pay equity and representation at companies across industries. In particular, the financial services industry faces intense public scrutiny around its diversity and inclusion policies and gender pay equity.

This public pressure has only increased in 2019. Earlier this year, Arjuna Capital, an institutional investor that is notably outspoken on this topic, published a gender pay equity scorecard that included several of the banks in CAP’s study. In June, Congresswomen Maxine Waters and Joyce Beatty sent a letter to bank holding companies with assets of greater than $50 billion, requesting information about each institution’s diversity and inclusion data and policies. In 2019, 21 percent of companies in CAP’s analysis included shareholder proposals in their proxy statements requesting that the banks report the median gender pay gap. Though these proposals failed to receive majority support from shareholders, CAP expects that requests for disclosure around diversity and inclusion policies and gender pay equity will continue both in the banking industry and broader market.

One key development for 2020 is the implementation of the Financial Accounting Standards Board’s (FASB’s) new credit loss measurement approach, the current expected credit loss (CECL) model, which will impact loan loss reserves. An early announcement from JPMorgan Chase indicates that it expects the change to increase reserves by 35 percent; however, the impact on reserves will vary from bank to bank based, in part, on the makeup of the loan portfolio. The move to the new reporting standard will impact results for profit and return measures and may have an impact on incentive plan goals that were previously set for outstanding long-term performance plan cycles.

Recently, news outlets have been reporting that regulators plan to finalize the Dodd-Frank rules governing incentive compensation at banks ahead of the 2020 presidential election. While this may seem counterintuitive to the current climate of deregulation, many believe that the current administration aims to finalize the rules to prevent the adoption of more onerous rules under a Democratic administration. If regulators move forward with this agenda item, banks will need to review their current incentive plans and, as necessary, consider adjusting them to comply with the final rules.

Early in 2019, BB&T Corporation and SunTrust Banks, Inc. announced that they will merge to create the eighth largest U.S. bank by assets. The combined bank will be called Truist Financial. The industry has not seen a merger of this magnitude since the 2008 financial crisis. The success of this combination could indicate a shift in attitudes around M&A activity between major financial institutions. However, given the regulatory uncertainty heading into the 2020 election, it remains to be seen if this merger will be the first in a series or a one-time event.

Compensation programs among the banks in CAP’s study continue to effectively tie pay outcomes to performance. In recent years, incentive plan designs among these banks have generally been stable.

However, the impending change in regulatory guidance following adoption of final Dodd-Frank rules may cause banks to begin to adjust incentive plan designs, though will likely not result in major changes. Other areas of uncertainty, including the impact of the implementation of the CECL standard, potential for a credit cycle or economic downturn, and uncertainty around the 2020 election, may affect incentive plan goal-setting processes or cause banks to make additional adjustments to executive compensation programs in 2020 and 2021.