CAP annually analyzes non-employee director compensation programs among Fortune 100 companies. These firms are viewed as trend-setting organizations. Below is a summary of trends – pay levels and pay practices – based on 2014 proxy filings.

Board Pay Levels and Structure

We have hit somewhat of a “steady state” in terms of director pay levels. Over the next few years, we expect modest pay level changes; i.e., low-to-mid single-digit annual increases in Total Board Compensation6. among the broader data set. Individual companies typically make pay level changes every two-to-three years; when they do, the changes tend to be larger than those observed annually within the full data set.

In terms of practices, pay programs have continued a trend towards simplification, as director compensation has become viewed more as an “advisory fee” than an “attendance fee.” Companies have moved to fixed retainer pay structures, with a component in cash and a component in equity, as opposed to use of per-meeting fees.

A number of companies have recently placed limits on director compensation. The limits are largely due to advancement of litigation in Delaware court. In these cases the issue has been that directors approve their own annual compensation, and the shareholder approved long-term incentive plan did not provide “meaningful limits” on the maximum award that could be granted to a director.

When seeking shareholder approval for amendment to an omnibus long-term incentive plan or director compensation plan, 23 percent of companies studied have included value- or share-based limits (13% and 10%, respectively) for non-employee director compensation. These limits range from $250K to $2 million, $800K at median, and typically apply to just equity-based compensation. Some companies have applied the limits to both cash and equity-based compensation while others have excluded initial at-election equity awards, committee Chair pay, and/or additional pay for Board leadership roles from the limit.

We expect prevalence of director pay limits to increase, becoming majority practice within the next three to four years.

The Lead Director role has evolved, oftentimes a more active role than three to five years ago. As a result, companies are looking at time commitment and responsibilities, and structuring compensation to appropriately reflect the current role and expectations. Boards are engaging in more outreach and meeting with shareholders to talk about governance practices, CEO succession and executive compensation, among other issues, and many investors want to hear from the Lead Director.

Making the decision to provide additional compensation to the Lead Director can send a signal to investors regarding expectations for the role, including time commitment, responsibilities, and authority. Many times, companies have been able to settle (or argue against) shareholder proposals to split the CEO and Chairman roles by instituting (or emphasizing) a strong Lead Director and delineating the specific responsibilities of the position. Boards can also reassure investors concerned about overall governance practices at a company by increasing the Lead Director role/responsibilities. Stock Ownership Guidelines Based on our research, 83% of companies have formal stock ownership requirements. Approximately half of companies studied required directors to defer recognition of equity pay until retirement. The median value of required stock ownership level was $450K.

At median, 2013 non-employee director compensation was $260K, generally consistent with 2012. 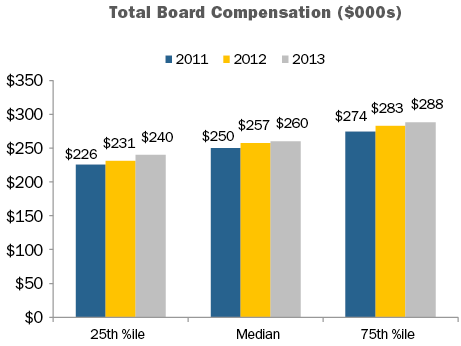 The mix of cash and equity paid to outside directors has remained the same for the last 3 years. On average, 56 percent of compensation was equity-based, and 44 percent was cash-based. 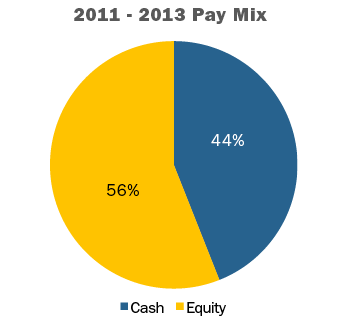 Full-value equity awards (stock/units) are the most common form of stock-based compensation. Only five percent of companies used stock options in 2013. 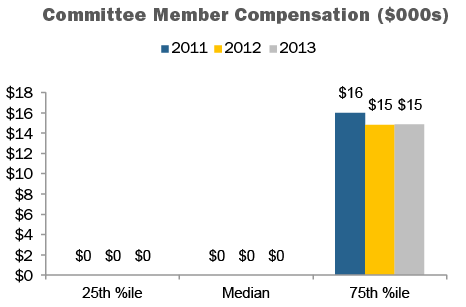 Lead/Presiding Directors and Non-Executive Board Chairs

Additional compensation is typically provided to Lead/Presiding Directors and non-Executive Board Chairs. 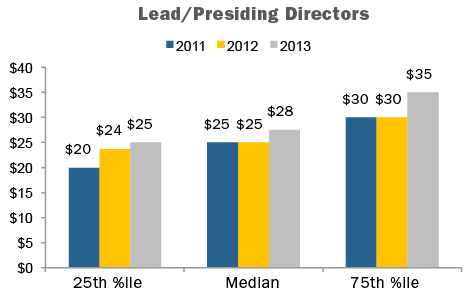 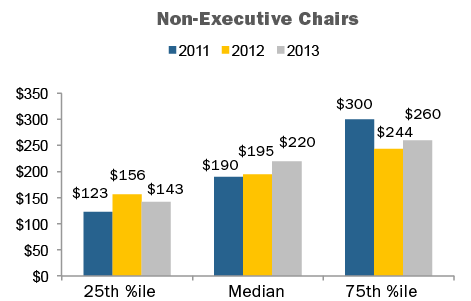