The Dodd-Frank Wall Street Reform and Consumer Protection Act allows public company shareholders to vote on Named Executive Officer (NEO) compensation arrangements related to a merger and acquisition (M&A) transaction. This vote, required beginning in 2011, is also referred to as say on golden parachute. Similar to say on pay, these votes are advisory and non-binding. The say on golden parachute proposal must be in the same merger-related proxy in which shareholders are approving the deal. Companies are required to disclose all compensation that may be paid to the NEOs because of the transaction as well as the conditions under which they become payable.

Companies put golden parachutes in place for the most senior executives so they can continue to make decisions that are in the best interest of the company. These arrangements also encourage executives to stay through the close of the transaction. Over the past ten years, many companies have adopted shareholder-friendly practices, such as double-trigger vesting of equity (i.e., change-in-control occurs plus termination of employment) and removing excise tax gross-ups, given increased shareholder scrutiny and the advent of the say on pay vote. 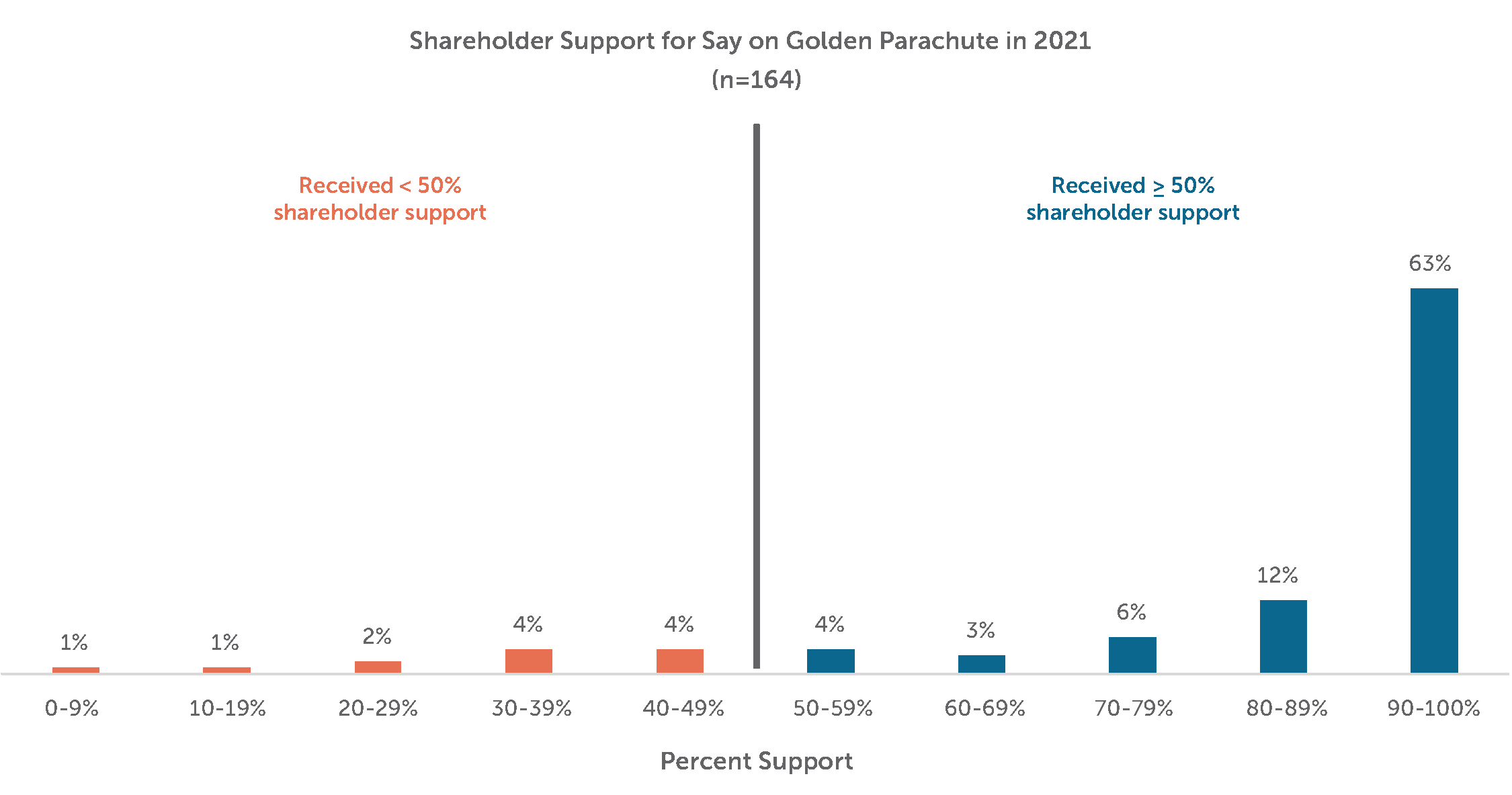 Proxy advisory firms, such as Institutional Shareholder Services (ISS) and Glass Lewis (GL), give investors a say on golden parachute vote recommendation. While these firms assess proposals on a case-by-case basis, they outline criteria used for the evaluation. ISS, for example, has multiple criterions used in their evaluation, but only note three that will most likely result in an against recommendation:

Unlike ISS, Glass Lewis does not note any specific factors that could result in an against recommendation. Instead, they list criteria considered when evaluating the proposal including (but not limited to) the value (or magnitude) of payments, excise tax obligations, tenure and position of executives, use of single-trigger vesting, etc.

CAP reviewed shareholder concerns from five recent acquisitions that failed their say on golden parachute proposal. Among these five companies, single-trigger vesting of LTI was the most common concern followed by excise tax gross-ups and large CEO retention bonuses. Shareholders are particularly concerned with single-trigger LTI vesting because executives could receive a windfall without termination of employment.

While not commonly cited, some shareholders were critical of how the equity vests at time of termination. Specifically, some were critical of accelerated or continued vesting (i.e., no pro-ration) of time-based equity while others cited above target payouts of unvested performance plans. It is unlikely that these provisions alone would result in an against say on golden parachute vote. Regardless, a company should provide a rationale for pay decisions, particularly if providing one-time retention awards or when deviating from previously disclosed shareholder-friendly practices.

Say on golden parachute votes are one-time, advisory, and non-binding but companies should be aware that there could be consequences of failing for the surviving entity. Beginning with the 2021 proxy season, Glass Lewis stated that they may recommend against the next say on pay vote or compensation committee members of the acquirer if an excise tax gross-up is introduced. To-date, we have not seen many shareholders vote against say on pay proposals of the surviving entity. Given continued scrutiny, we anticipate companies will carefully weigh the pros and cons of implementing non-shareholder-friendly provisions at the time of the deal; for those that do, we would expect to see robust disclosure on the rationale.