Annually, Compensation Advisory Partners (CAP) evaluates pay levels for Chief Financial Officers (CFOs) and Chief Executive Officers (CEOs). This year’s analysis is based on a sample of 108 companies with median revenues of $12.4 billion. For more information on how we developed the sample of companies, please see below under Sample Screening Methodology. 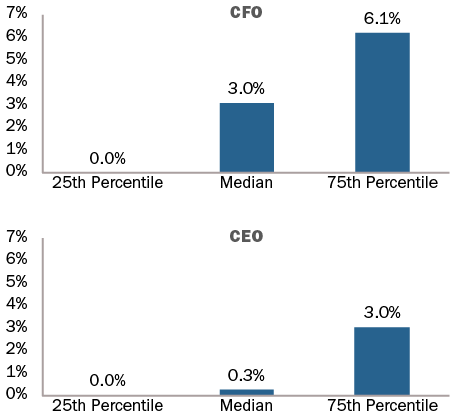 Our findings indicate a median rate of increase in actual total direct compensation levels for both CEOs and CFOs in the low-single digits. The median increases over the last two years ranged between 3% and 5%. During 2013-2014, actual total direct compensation (salary plus actual annual incentive plus the grant date value of long-term incentives) for CEOs and CFOs increased by 3.2% and 5.2%, respectively.

When analyzed by industry, median increases in salary for CEOs are generally less than 3%. Median salary increases to CFOs are much more robust, generally in the range of 3-4%. Median salary increases over 3% are seen for CFOs in the following industries: Consumer Discretionary, Energy, Healthcare, and Materials. The Financials industry is the only industry were the median change in salary was 0% for both CEOs and CFOs.

When we look at actual total direct compensation by industry, greater volatility is observed. The volatility in year-over-year changes is primarily driven by industry and company performance. Some of the largest increases in compensation levels are seen in Consumer Staples, Healthcare and Materials.

Equity mix and vehicles used for LTI awards remained fairly consistent for the past several years. The majority of companies continue to use two different vehicles to deliver long-term incentives to CEOs/CFOs and a quarter of companies studied use all three equity vehicles (time-based stock awards, awards under a performance plan, and stock options)

In terms of performance, 2014 was a good year for our sample of companies with median total shareholder return of 15%, median revenue growth of 5% and median net income growth of 9%. We believe the 2014 pay changes were aligned with performance for the year. For CEOs, salary increases were modest, but increases in actual bonus and long-term incentives contributed to a median increase in actual total direct compensation of 3.2%. Pay progression opportunities for CFOs were even stronger, with a median increase of 7.8% in actual bonus and 4.2% in long-term incentives yielding a 5.2% median increase in actual total direct compensation.

Based on the screening criteria below, we arrived at a sample of 108 public companies with median 2014 revenue of $12.4B.