The transition from a private company to a public company is an exciting time for most organizations. For employees, moving from private to public status provides the first opportunity to potentially gain liquidity from equity-based. For venture capital or private equity investors, it typically represents the first opportunity to realize gains from their investment and risk-taking. However, becoming a public company creates new disclosure requirements and opens up compensation programs to scrutiny from a new group of public shareholders and shareholder advisory firms.

As a public company, there is an increased requirement for processes governing the company’s compensation decisions. All public companies (other than those controlled by a 50% or greater shareholder) need to have a Compensation Committee of two or more independent directors. The Compensation Committee needs to have a Charter that lays out the responsibilities of the Committee, including its responsibility for overseeing the pay of the CEO and the other executive officers of the company.

In practice, there is a lot of work to set-up a functioning Compensation Committee. Key steps to get a Committee up and running include the following:

Many companies adopt some of the above practices in advance of going public and this tends to make the transition easier. We find that new Committees have some room to learn as they go; however, the fundamentals of the process should be in place upon going public.

For a newly public company, one of the most fundamental compensation decisions is to establish a compensation strategy and pay philosophy. Most companies will want to ensure that the compensation program addresses the following objectives:

As part of the compensation philosophy, while not required, companies will frequently identify a peer group. The peer group is comprised of publicly traded companies and used for pay and/or performance benchmarking. Since one of the primary purposes of the peer group is to assess the competitiveness of pay, a key factor in identifying peers is whether the companies are potential competitors for executive talent. In addition, for external credibility, the peer group should be comprised of companies that are comparable in size (e.g., ~.5x – 2x) your company’s size in terms of revenue and from comparable industries. Ideally, some of the peers will also be newly public companies, though this is less important for more mature companies that are going public.

Most public companies establish a pay philosophy discussing the positioning of target pay levels. The most common pay philosophy statement is along the lines of “our company targets total pay levels at the median of our peer group with variation around median based on individual circumstances.” There is flexibility to have a pay philosophy that targets pay levels above median, but these pay philosophies often attract criticism from shareholders. Alternatively, the company could target below median base salaries and annual incentives and deliver above median long-term incentives. This approach to pay may be more appealing to shareholders, especially with growth companies, with its emphasis on long-term compensation.

Pre-IPO companies may or may not have a formal annual incentive plan. For some emerging growth companies, there may be a focus on conserving cash and therefore limited cash available for compensation and as a result, the companies may deemphasize annual incentive compensation. In addition, early stage companies in some industries (e.g., biotech, internet) may not have strong income statement performance (e.g., revenue or profitability) and may tie the incentives they pay to the achievement of strategic objectives (e.g., successful clinical trials, product launches, etc.)

Once companies are public, there are greater expectations from shareholders and shareholder advisory groups that if the company pays an annual incentive, it will be based primarily on the achievement of financial results, with only a small portion based on more qualitative performance criteria. The larger the annual incentive opportunity is as a percentage of total compensation, the greater the expectation that the incentive will be based on financial performance. Shareholders will generally not be happy if a CEO can earn a bonus equal to 50-100 percent of base salary, unless the company has delivered strong financial results. Our analysis of 30 recent IPO’d companies found that 70% have adopted formal bonus plans with quantitative metrics following the IPO. 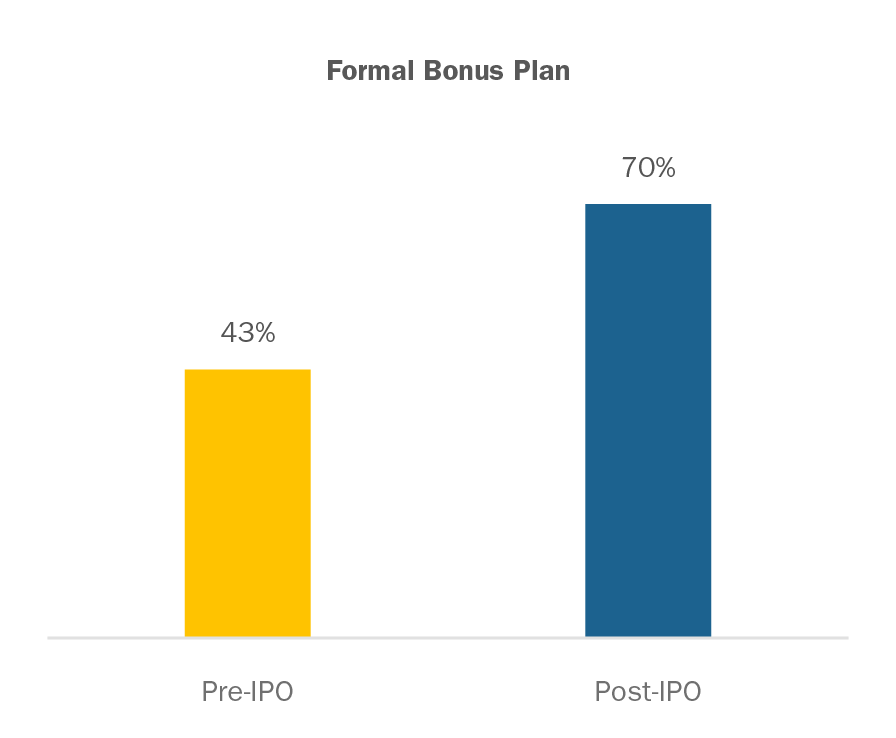 Note: For both annual and long-term incentives based on the tax code rules (IRC Sec. 162(m), the “performance based compensation” tax exemption for select executive officers), if a company gets an annual and long-term incentive plan approved prior to the IPO and discloses such plan documents in any S-1 filing, the company is exempt from IRC Section 162(m) rules for approximately three years.

Pre-IPO companies typically use stock options as the main long-term incentive vehicle as they tend to closely align the interest of the venture capital or private equity investors. Rather than making annual grants to executives, pre-IPO companies will generally make large up-front grants to lock in on an early (presumably lower) valuation for purposes of determining the exercise price. In many cases, the equity grants are established as a percentage of the company’s common shares outstanding rather than a targeted dollar value. If an executive has served with the company for a number of years prior to the IPO, then it is possible that all or a majority of the stock options that the executive holds are vested by the IPO. This may be a concern for shareholders for potential shareholders and the company needs to demonstrate it has a game plan for locking in the executives post-IPO.

An important first step for the company as it approaches the IPO is to assess whether its existing reserve of shares set aside for grants to employees and directors will be adequate to cover future grants. It is generally preferable to obtain approval of additional shares for future grant prior to the IPO, as the equity plan needs to be approved by shareholders and it is simpler to gain approval from the VC or private equity shareholders than the new public shareholders. We recommend that the equity reserve and overhang (i.e., share reserve plus outstanding awards relative to total shares outstanding) be benchmarked relative to peer practices to ensure that the reserve will not be viewed as excessive by external shareholders, as eventually the company will have to go to public shareholders for purposes of 162(m) compliance and/or additional shares.

In situations where executives’ equity is largely vested by the time of the IPO, the company may use the IPO as an opportunity to “re-up” equity grants to senior executives to “lock them in” for the next few years following the IPO. However, in order to size any grants made at IPO, the company will likely want to rely on competitive market practices for annual grant values among the peer group. In addition, the company may want to consider shifting to an annual grant frequency, as this is the most common equity granting approach among publicly traded companies.

Public companies have moved toward an annual grant frequency for several reasons, including the following:

If you decide to adopt a performance-based long-term incentive, the most common design is a performance-share plan. These plans provide for a target opportunity denominated as a number of shares. Performance is typically assessed over a three-year period, with the number of shares earned ranging from a threshold amount (typically 25%-50% of target) to a maximum amount (150%-200% of target) based on an assessment of performance relative to pre-established performance criteria. Plan designs are mixed among measuring performance relative to financial criteria (e.g., EPS, revenue growth), stock price performance (e.g., total shareholder return relative to peers or the broader market), or a combination of financial and stock price performance. Performance share plans are now the single most prevalent form of long-term incentive for executives at large public companies. In our analysis of the post-IPO practices of 30 recent IPOs, we found that the LTI mix for post-IPO grants shifted away from stock options with weight shifted towards time-based restricted stock and performance-based LTI. 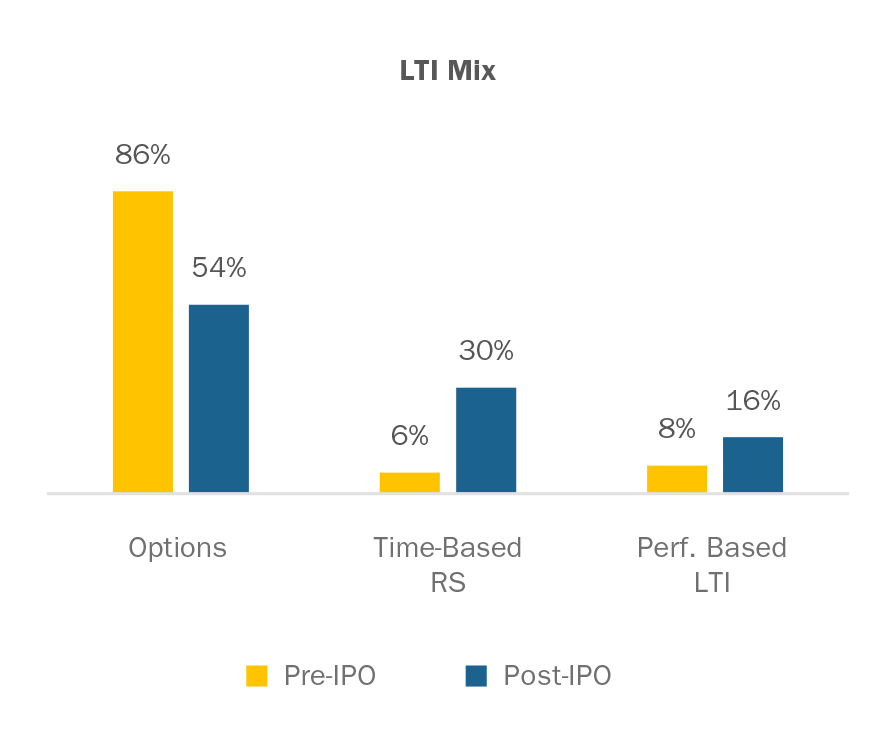 Severance provisions should be established as part of a formal severance program (change in control or not change in control) or through severance agreements, or less frequently, as part of an employment agreement. These programs should be implemented after careful consideration of potential costs and benefits to the participants, competitive practices for comparable organizations and if the company desires to maintain a formal program. Gross-ups for any 280(g) CIC tax liabilities are no longer common and should not be included. If not already in place, non-compete and non-solicitation provisions should be put in place for the company, as standalone policies or as part of LTI award agreements.

Lastly, other good governance features such as stock ownership guidelines, clawbacks (recoupment policy), and anti-hedging and pledging are considered good practice and are also generally in the best interests shareholders (see data on post-IPO adoption below). How quickly the company adopts these practices depends on how far the company wants to go to be viewed as shareholder friendly. 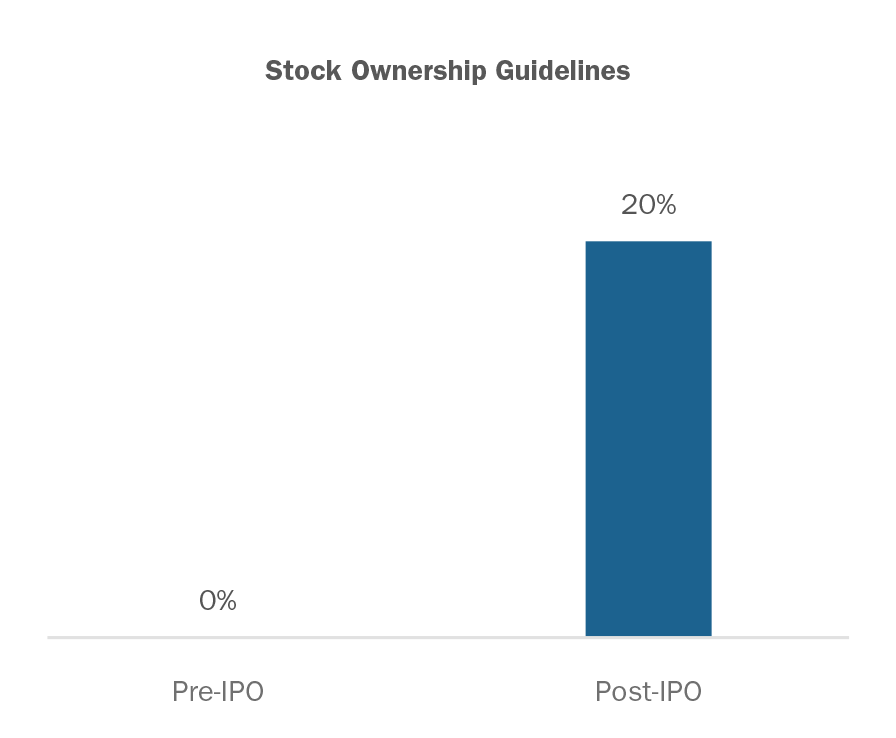 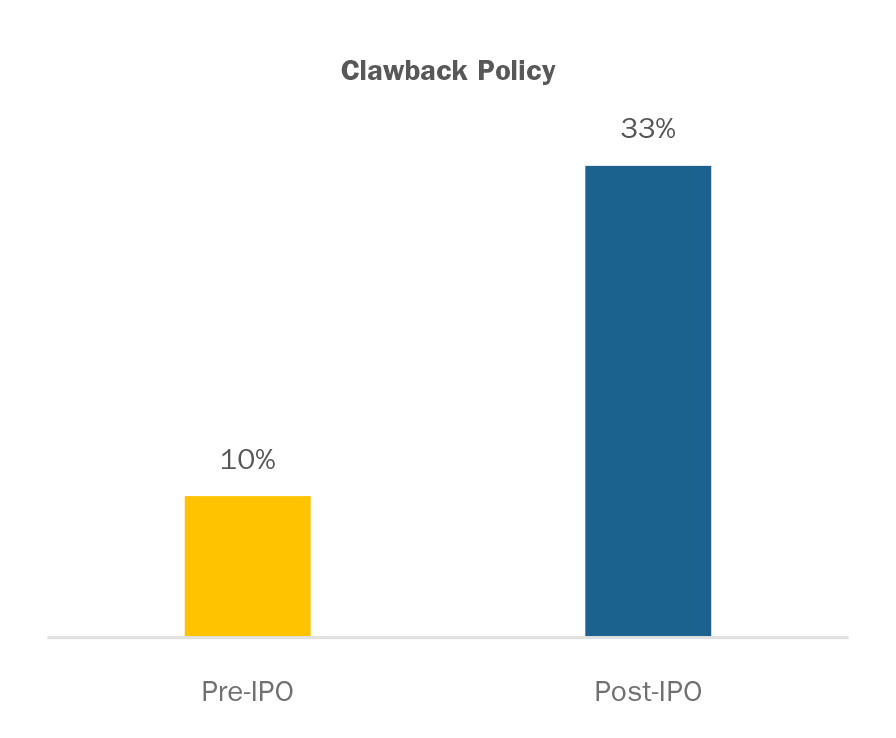 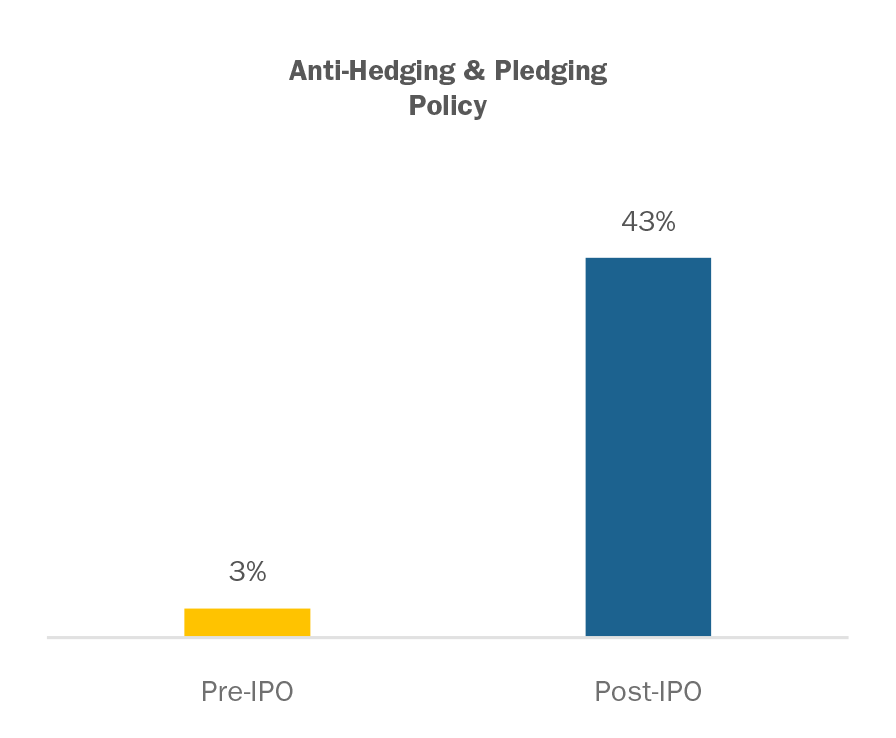 The IPO is an exciting time for executives and private company shareholders. From a compensation perspective, it is also an exciting time as the company transitions from a model built around an eventual liquidity event to a compensation program that is expected to be maintained over time as a public company. As a public company, the compensation program will be under additional scrutiny and the Compensation Committee will be accountable to a much larger shareholder base. By developing strong compensation governance practices and understanding competitive practices for pay program, Compensation Committees can move forward with confidence that their approach to compensation will meet the strategic needs of the company and stand-up to external scrutiny.