Compensation Advisory Partners (“CAP”) reviewed 2014 proxy disclosures for a 100 company subset of the Fortune 500 representing a cross-section of nine industry groups. The industry groups included: Automotive, Consumer Goods, Financial Services, Health Care, Insurance, Manufacturing, Pharmaceutical, Retail, and Technology. Our research examined changes in executive compensation practices in 2013, or indicated for 2014, and observations on current trends and pay program design. This CAPflash focuses on long-term incentive plan design and notable trends including changes made in 2013 or planned for 2014.

The companies included in this study have a median revenue size and market capitalization of $32B and $52B, respectively. The median total shareholder return was 43% for 2013.

The overarching priority for many companies is to use LTI vehicles that best align with their business strategy and unique shareholder value proposition. For example, Aetna, Inc. replaced performance-based market share units (“MSUs”) with time-based stock appreciation rights (“SARs”) in 2014. Aetna disclosed that the longer term nature (10 years) of SARs “…supports the Company’s long-term strategic focus to drive change in the healthcare industry and to create long-term shareholder value.” Another example is Pfizer, Inc. which grants 5- and 7-year Total Shareholder Return Units (“TSRUs”). Pfizer discloses that the value executives realize from TSRUs “…is consistent with the value received by Pfizer’s shareholders.”

The table below outlines the reported changes among companies in our study:

Note: Percentages add to greater than 100% due to multiple changes by certain companies.

Over the past three years, the prevalence of stock options has declined slightly and the use of time-based restricted stock has been relatively flat. Companies tend to grant these vehicles as a supplement to performance-based LTI.

Below is the breakdown of the percentage of companies granting each LTI vehicle to NEOs from 2011-2013: 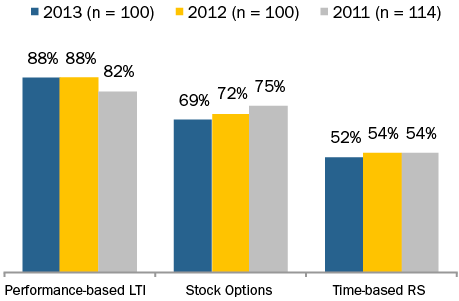 Note: Percentages add to greater than 100% because most companies grant a variety of vehicles.

Companies continue to use multiple vehicles to deliver LTI to executives. 51% of companies in our study deliver LTI in the form of two vehicles, 29% use three vehicles and 20% use only one vehicle. Among the companies that deliver LTI compensation through one vehicle, 60% grant only performance-based LTI.

The average LTI mix in 2013 is generally consistent with 2012. Performance-based LTI continues to represent more than half of the LTI mix (approximately 55% of total LTI) while stock options represent approximately 25% and time-based restricted stock represents 20%.

The chart below depicts the average LTI mix for NEOs as disclosed in the CD&A: 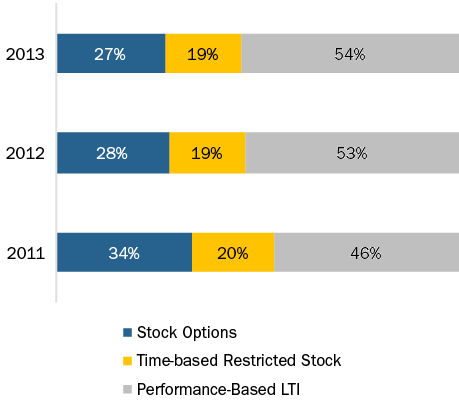 Companies routinely reassess their LTI plan design, including the performance metrics used, to ensure that the design reflects the company’s business strategy and objectives to attract, incentivize and retain executives. Among performance-based LTI plans, the use of a return measure increased to 49% in 2013 (up from 41% in 2011) indicating that companies are trying to encourage operational efficiency, along with profitability and growth. Among the companies that use return measures, 47% use ROI or ROIC, 37% use ROE and 16% use ROA. TSR and EPS are also prevalent long-term incentive metrics, used by 42% and 36% of companies, respectively. In our study, most companies with performance-based LTI plans use two metrics.

Companies are also more likely to use LTI metrics that reflect key measures of success in their industry. The Automotive industry frequently uses Cash Flow as a metric, focusing executives on liquidity to manage the significant cash requirements associated with the industry. In the Pharmaceutical and Technology industries, where the success of a company’s pipeline and current product offerings is reflected in their stock price, TSR is used more frequently as a metric.

The chart below displays the prevalence of LTI metrics for performance-based awards in 2011-2013:

The most commonly used metrics are return measures, such as ROI, as well as TSR and EPS. These metrics demonstrate that companies are attempting to use LTI to incentivize operational efficiency, profitability and growth. While most companies evaluate financial performance against internal goals, a growing number of companies have adopted a two-pronged approach to long-term performance measurement. These companies use internal financial goals and also incorporate a relative goal (typically TSR) to measure company performance in the context of the external market.

While most companies have already implemented changes that provide for a stronger link between executive pay and company performance, we expect to see companies continue to refine their performance-based LTI plans to support their business strategy. Additionally, we expect that setting meaningful long-term financial goals will continue to be a challenge for many companies leading some to incorporate relative performance metrics in the LTI program.