CAP Partners Bertha Masuda and Susan Schroeder talking about how to compensate family members working in the business.

Bertha Masuda and Bonnie Schindler discussing the use of ESG metrics in private companies.

Bonnie Schindler and Susan Schroeder discussing the Executive Chairman role and its use in Succession Planning for private companies.

Short-term incentives (STIs) have become nearly universal at private companies to align pay with short-term performance, according to a recent survey by CAP and WorldatWork. “2019 Incentive Pay Practices: Privately Held Companies” found that STI prevalence reached 99 percent in 2019, up from 96 percent in 2017 and 94 percent in 2015.

Other key survey takeaways include:

The full results of the private company survey are available to WorldatWork members.

This report summarizes the Compensation Advisory Partners analysis of survey data collected in May 2019 in collaboration with Family Business and Private Company Director magazines.

To address this lack of competitive market data, Compensation Advisory Partners (CAP), and Private Company Director and Family Business magazines (both of which are published by MLR Media) worked together to survey private companies about their director pay programs. The response was enthusiastic, with more than 600 companies submitting data during the May 2019 survey period. This article provides a high-level summary of the survey data and describes how private companies can approach the design of effective and competitive board compensation programs.

About the Survey Participants

The private companies that responded to the survey represent a broad array of demographic categories. This broad representation results in a robust and unique data set detailing board of director compensation levels and practices.

The survey asked about company size because that typically has an impact on board pay levels. Survey respondents have median revenue of $90 million and average revenue of $631 million. The companies in the survey span many revenue sizes as shown in Exhibit 1.

The companies that responded to the survey represent a broad range of industries. The largest industries represented in the survey are manufacturing (31%); finance and insurance (9%); retail trade (8%); wholesale trade (7%); professional, scientific, and technical services (7%); construction (7%); real estate, and rental and leasing (5%); and health care and social assistance (5%).

With regard to company ownership, the largest portion of the sample by far is made up of family-owned businesses. Other ownership groups represented in the sample are companies that are closely held by unrelated owners, private equity-owned or -invested, and employee-owned. (See Exhibit 2.) The “other” ownership category in Exhibit 2 includes mutual companies, tax-exempt entities, and cooperatives.

The vast majority of survey respondents are headquartered in the United States, but the survey drew responses from companies headquartered all over the world. (See Exhibit 2.) 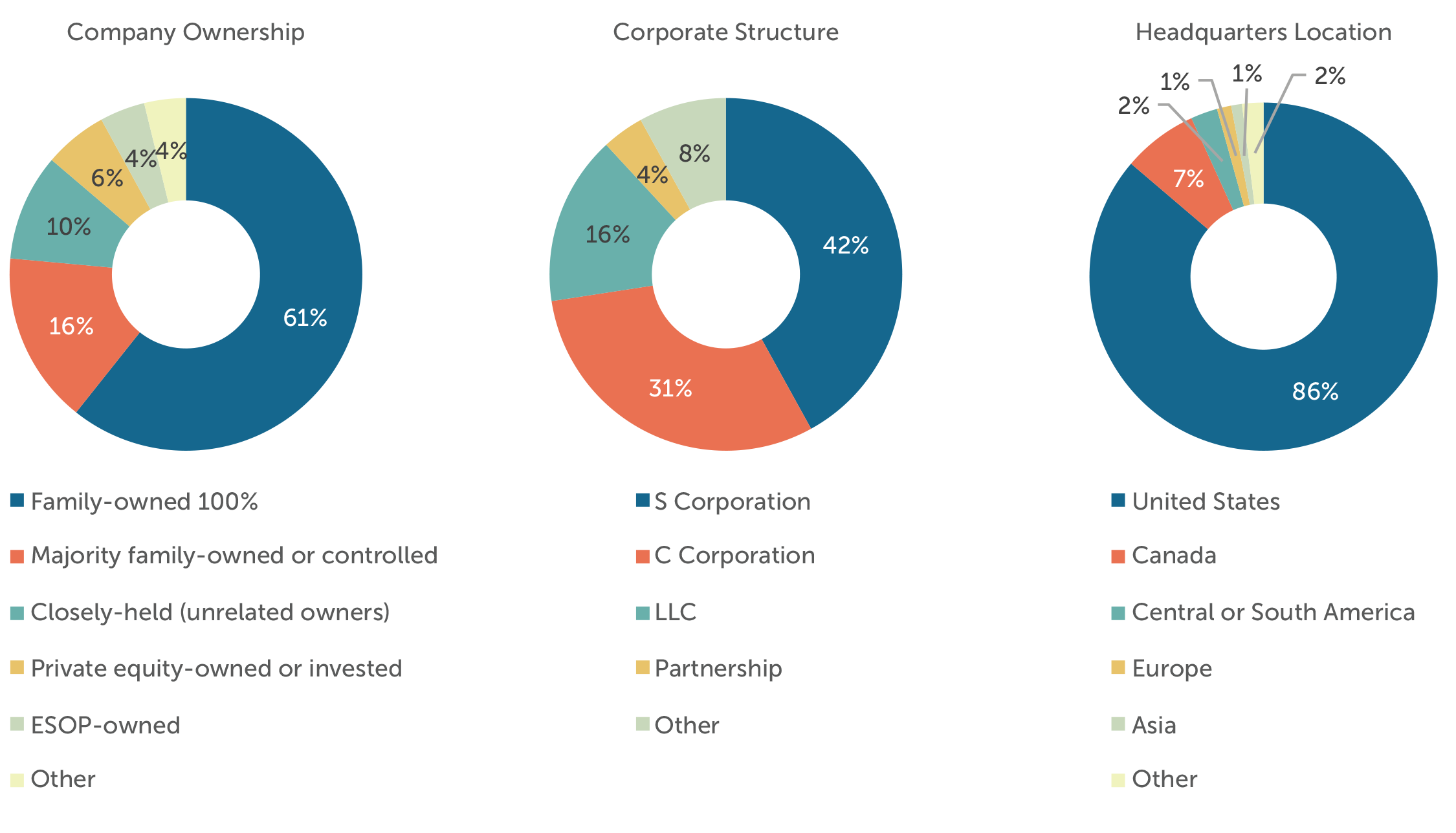 Private-company board compensation programs have two common cash components: An annual retainer and per-meeting fees. An annual retainer, which is an amount paid to each eligible director on an annual or quarterly basis for board service, is offered by 72 percent of private companies surveyed. Per-meeting fees are smaller amounts paid to eligible directors for attendance at each board meeting, and they are offered by 54 percent of the companies surveyed. (See Exhibit 3.)

According to the survey, the median annual retainer is $30,000, and the median per-meeting fee is $2,000. Annual retainers and meeting fees increase with company size. (See Exhibits 4 and 5.) Some companies also pay eligible directors a lesser amount for participation in telephonic meetings, with the median payment being $1,000.

Private companies continue to use both an annual retainer and meeting fees, while the trend for director cash compensation at public companies is to pay a higher annual retainer only (i.e., no meeting fees). Public companies have adopted this approach because directorship requires time and effort beyond meetings, so retainers better reflect the requirements of the overall role. In addition, advancements in technology have made meeting participation easier and have blurred the lines for what constitutes a meeting, and public company directors are expected to attend at least 75 percent of board meetings. Incentivizing meeting attendance is, therefore, less of an issue for public companies. Finally, retainers are easier to administer than meeting fees, which require attendance tracking.

Private companies recognize the value that board members bring to the table; however, only about 20 percent of the private companies surveyed provide long-term incentives to their board members in the form of phantom equity, cash multi-year incentives or actual equity grants, such as stock options or full-value shares. This low prevalence is not surprising, as private companies do not have publicly traded stock. This contrasts with public-company practice, where the vast majority grant equity to their directors. Publicly traded firms provide at least half of a director’s total compensation in the form of equity, typically full-value shares.

Table 1 summarizes the board compensation elements reported in the survey. (Additional data is included in the full survey report, which is provided exclusively to survey participants.)

A final prevalent practice for private companies is to reimburse directors for their travel expenses. While this iteration of the survey did not ask about benefits and perquisites, some companies referenced them in their “other” responses. Future iterations of the survey may quantify such compensation elements.

Companies that are trying to compete for talent or attract special skills should strive to provide a competitive board compensation program, although director pay does not need to be as high as at a public company. Private company boards have a lower level of risk, disclosure and regulation than their publicly traded counterparts.

Once the objectives of the compensation program are defined, the next steps are to conduct internal and external reviews:

Internal review – This step involves looking at the company’s situation and the board dynamics. Issues to consider during the internal review are the complexity of issues facing the company; the likelihood of mergers, acquisitions and/or divestitures; whether the company plans to pursue a value-realizing event; any potential leadership changes or a generational transition in a family business; the company’s executive compensation philosophy and programs; the shareholders’ desire to share equity or not; whether the board’s role is fiduciary or advisory; directors’ expectations and other boards on which the directors serve; the board’s expected time and meeting commitments; non-compensatory benefits of serving on the board; and which board roles and/or committees are more involved and time-consuming. In general, boards and board roles with greater complexity, risk and challenges merit higher compensation.

External review – The external review involves considering how the company compares to its peers and collecting board compensation information for similar companies and/or boards. Sources of compensation information may include informal information from executives and directors about what other companies offer, and more formal information such as public peer company proxy data (generally excluding the equity data) and published survey data, such as the CAP-MLR Media survey. (Companies that participate in the survey have access to specialized data cuts by revenue size, industry and other parameters.) The goal of the external review is to understand competitive compensation practices and ranges, and to inform the company’s decision-making.

Once the internal and external reviews are completed, company shareholders can make decisions about the director compensation program. The shareholders will need to decide what type of pay model to adopt: retainers only, meeting fees only, or a combination of the two. As mentioned previously, publicly traded companies are moving toward a “retainers only” approach for cash compensation. However, the private-company survey indicates that more than 50 percent of private companies use per-meeting fees to compensate directors. A “retainers only” pay model makes sense for companies that wish to pay for overall board roles rather than time spent at individual meetings. Indicators that favor a “retainers only” pay model include material director time required outside of meetings, frequent interaction between board members outside of meetings that could create ambiguity about whether a formal meeting is taking place, a more predictable board workload and a desire for administrative simplicity. Under this model, retainers will need to be set at a level to compensate for all board work. Retainers also can be used to differentiate compensation for board roles. For instance, a basic retainer can be provided to all directors for board service, and incremental retainers can be provided to committee chairs and the board chair to recognize the additional time, effort, skills and knowledge required for those roles.

At the opposite end of the spectrum, some companies may choose a “meeting fees only” pay model. This pay model makes sense if most of the board work is tied to the meetings themselves. Per-meeting fees can be set to take into account typical meeting length, and preparation and follow-up time. Indicators for this pay model include an unpredictable number of meetings, comfort with the administrative efforts required to track and compensate meeting attendance, and most work requirements corresponding to board and committee meetings. Under this pay model, committee work can be compensated through meeting fees that are the same as board meetings or less if committee meetings require less time. In addition, roles such as chairman or lead director could be recognized with a higher per-meeting fee.

For companies that fall somewhere in the middle, a combination of retainers and meeting fees might make sense. Some companies with the potential for a flurry of meetings can stipulate that the basic retainer covers a certain number of meetings. If meetings are required above the number covered by the retainer, then meeting fees will be paid to directors.

In addition, the shareholders will need to decide whether to offer any sort of long-term incentive, such as phantom or real equity, for the directors. Companies that wish to reward directors for contributing to the company’s success and to align director interests with shareholder interests may want to consider providing directors with phantom or real equity stakes, or a multi-year performance bonus. However, according to the CAP-MLR Media survey, most private companies do not do this. However, the practice is common for start-up companies that are cash-constrained, and for private-equity owned companies. In both of those situations, stock options are a common vehicle.

Before implementing a new director pay program, companies should consider the prior year’s board schedule and workload, and calculate what the company’s board compensation expenses would have been last year using the proposed compensation program. This step is particularly important for companies that offer meeting fees. Modeling payouts under a new pay program will help validate the proposed program and flag any potential issues. The company should look at the modeled expenses of the new program relative to past spending on board of director compensation, and determine whether the new program’s costs are reasonable.

Board Composition and Governance

Advisory Board – A more informal board that provides guidance and advice to the company’s management team and shareholders, but the board has no legal obligations.

Fiduciary Board – A formal board with voting rights and legal obligations to a company. Fiduciary boards oversee the chief executive officer and management.

Independent or Outside Director – An individual on a company’s board who has no ties to the company through employment or family status, and who has no ownership other than compensatory stock provided for board service.

Inside Director – An individual on a company’s board who works at the company or who has ownership of the company, including through family status.