Considerations for Compensation of Separate Board Chairman

For many years, common practice in U.S. public companies has been to combine the roles of chief executive officer (“CEO”) and chairman of the board (“COB”), typically assigning the COB title and responsibilities to the sitting CEO. More recently, due to increased focus on governance and risk management, companies frequently separate the two roles. In some cases, companies will transition outgoing CEOs to the COB role. The duties of a separate COB can vary a great deal between companies, and expectations for the role as well as time served in the role will impact compensation. This review focuses primarily on the transition from CEO to COB and highlights compensation practices and factors influencing pay.

Based on a review of companies ranging from $1 billion to $20 billion in revenue, we found that approximately 10% of companies operate with an Executive Chair and 45% have a Non-Executive Chair. Among the 10% with an Executive Chair, approximately one-half are founders (or have significant ownership in the company, i.e., more than 15% of shares outstanding), and the majority were former CEOs. This fact pattern is a very rational and effective progression, providing a smooth transition and advantages to the new CEO, shareholders, and the company’s overall operating efficiency. In the case of Non-Executive chairs, it is more common for the role to be filled from outside the company or by a member of the board of directors.

The need for and role of a separate COB evolves for different reasons. The responsibilities and time commitment of this role can vary greatly by company. Many founders step out of the CEO role to reduce their time commitment, but continue on as COB for many years so they can oversee the results of the company and weigh in on the company’s performance and strategy. Alternatively, the board may ask an exiting CEO to stay on for a year to help with the transition to a new CEO and provide continuity to the organization. It may be that an exiting CEO stays on to oversee a major initiative that needs dedicated oversight. The role could evolve as a result of a spin-off from an existing public entity. While difficult to generalize, there are certain duties that may be a part of any separate COB role such as executive coaching and mentoring, succession planning, and long-term strategy development. The COB is most often an advisory role, with no oversight of daily operations. These responsibilities dictate the planned timing of the role itself, be it short or long-term service in the position.

While there is variation in pay practices that we discuss below, our research shows that the following pay practices, expressed as a relationship between compensation of the Executive COB and CEO roles.

The background of the incumbent assuming the COB role may create some variations to pay levels and practices. For example, Executive Chairs that are founders/significant owners of their company make about 35% more, at median, than non-founder Executive COBs.

Transition of an Active CEO to an Executive COB Role

When a successful, long-tenured Chairman and CEO begins to plan for retirement, companies may strategically approach the succession process over time. Boards may keep the retiring CEO on as an employee of the company, as Executive COB, for a period of time. This period allows for a smooth succession of responsibilities. It may also mitigate uncertainty about new leadership. It is possible that a Lead Director, outside Board member, or other executive may fill the role of Executive (or Non-Executive) Chair, yet most often the role is filled by a retiring CEO.

While pay practices vary, there are considerations to be made as it relates to compensation based on the expected timing that the Chairman role will exist or that the individual incumbent will be in the role. There are some patterns in the compensation structure if the role is shorter or longer- term.

When a CEO transitions to an Executive COB role, planned for a shorter period of time, the CEO often changes roles near the end of the fiscal year or near the annual shareholder meeting. There tends to be minimal adjustment to the base salary or annual incentive target for this period in the role. If the annual equity grant has not been made for the year, companies tend to reduce the value of the equity award and the form of the award may be modified. Companies differ on the treatment of outstanding equity awards. There are two potential scenarios:

If the transition is made after the annual equity grant, companies tend not to decrease the equity grant amount in the year of the change. Companies should consider which approach is most appropriate given the vesting period that remains, the type of outstanding award (e.g., 10-year option, 3-year performance award), the cumulative value that the COB may receive due to any enhancement, and potential shareholder reaction.

When the Executive COB role is expected to be greater than one year, adjustments are made to the level of pay and the forms of compensation used. Overall, base salary and annual incentive targets may be 85% to 95% of the current CEO’s pay levels. Equity may be decreased to 40% of what it was while serving as CEO, resulting in total direct compensation that is 65% and 75% of the compensation of the current CEO.

Equity awards tend to have time based vesting and are commonly not tied to longer term company performance. Vesting schedules may be modified, if necessary, to align with the expected timeframe of the Executive COB’s service. Companies often make annual equity awards, yet those that have clarity around expected timeframes may grant one-time awards intended to cover the entire time in the role.

A related benefit for CEOs in this situation may be the continued vesting of large outstanding equity grants that were received while serving as CEO. When award vesting follows the normal course, shareholders and proxy advisory services firms may view this more favorably than enhanced vesting arrangements that may be provided when the CEO retires sooner.

Pay for Executive COBs varies a great deal and depends on a company’s particular situation. However, when specific situations are examined closely, patterns do emerge. For example, our research indicates that a COB who is a founder or significant shareholder tends to get paid more than COBs who are not founders or significant shareholders. We also found that exiting CEOs who transition into a COB role for a short period of time may frequently receive preferable equity vesting treatment. General pay norms will help provide direction, but the responsibilities, time commitment, incumbent’s tenure with the company, ownership status, etc. should all be factored into the compensation program provided. 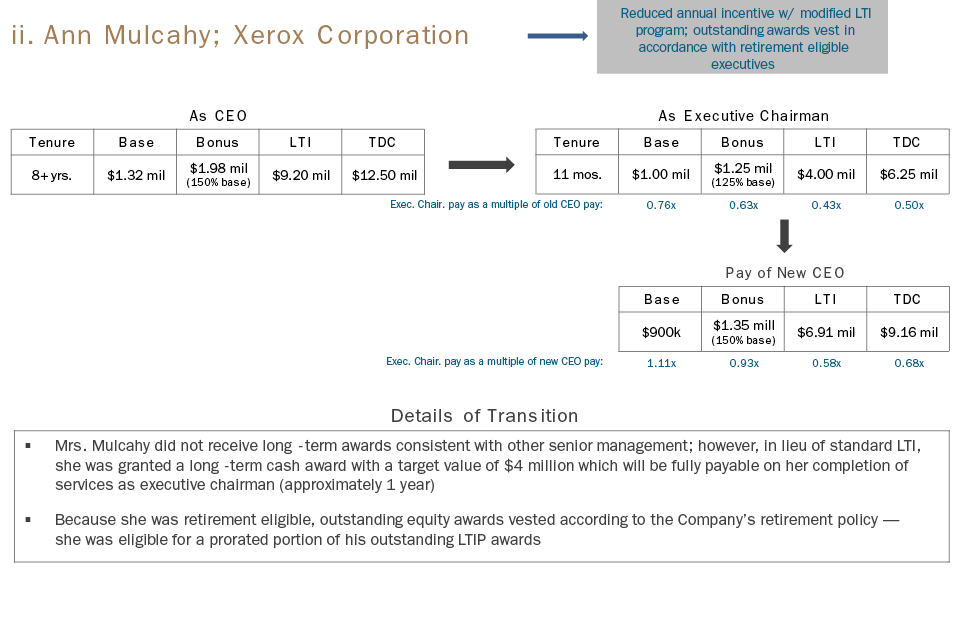