CAP analyzed payouts under long-term incentive plan performance cycles that ended in 2015 through 2020. This analysis includes 120 companies from ten industries with median revenue of $36B. We selected these companies to provide a broad representation of market practice across large US public companies.

Long-term performance plans are important performance-based tools that companies use to reward executives for achieving medium to long-term financial objectives and creating shareholder value; they often represent the most significant portion of executive compensation programs. Setting appropriate performance goals is critical to establishing a strong link between pay, performance, and shareholder outcomes. The challenge is to achieve a balance between rigor and attainability, amidst expected industry and economic factors, to motivate executives to drive long-term company performance and shareholder returns.

Based on our analysis of long-term incentive payouts from 2015-2020, the degree of difficulty, or “stretch”, embedded in long-term performance goals translates to:

Long-term performance plans predominantly use objective financial or stock price metrics. The most common long-term performance plan metrics are relative Total Shareholder Return (TSR), Return measures, and Earnings per Share (EPS). Many companies use a combination of financial and stock price metrics to balance line-of-sight for executives and direct alignment with shareholder outcomes.

In some cases, companies with cash-based long-term incentive plans have introduced ESG metrics into their long-term plans because cash plans are already subject to variable accounting. One example is Nike, which uses long-term Diversity, Equity, and Inclusion (DE&I) and sustainability metrics. As companies continue to define objective goals around their long-term ESG strategies, we may see more companies use these metrics in long-term equity plans as many companies view ESG and strategic goals as longer-term in nature.

As demonstrated in the chart below, the percentage of companies achieving target and above generally trended upward for payouts made for performance periods that ended in 2016 to 2019 before dropping off in 2020, likely due to the impact of COVID-19 on some industries. 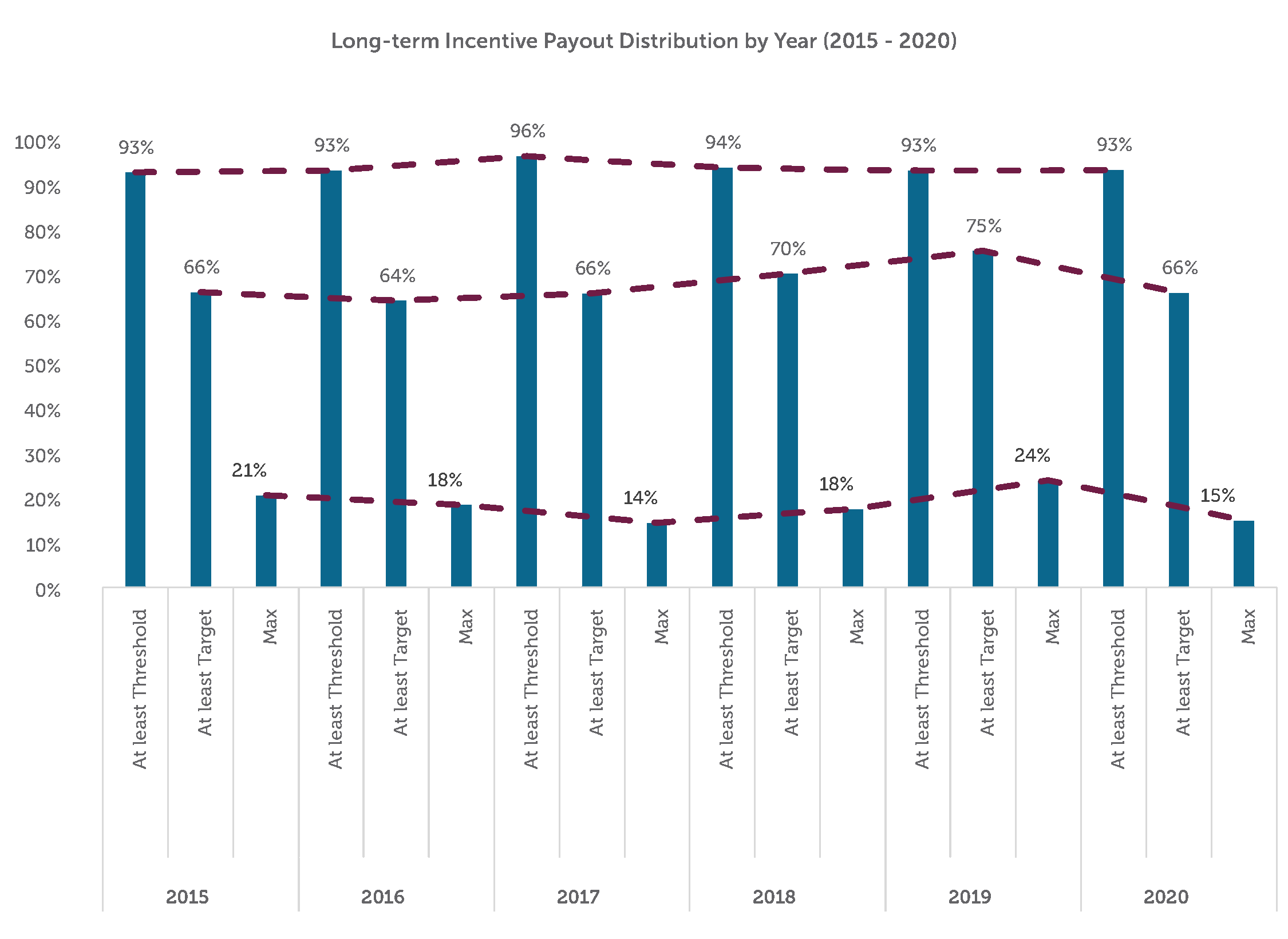 Our study found that select industries have payout distributions that fall outside the norms of the broader group. Companies in the health care, pharmaceutical and insurance industries paid at target or above 80-85 percent of the time versus 70 percent for the full sample. Conversely, companies in the consumer goods and retail industries, where Revenue growth has lagged that of other industries in recent years, achieved target performance slightly more than 50 percent of the time. Several factors may contribute to such differences in payout distributions, including metric selection, goal-setting, and economic influences.

This same pattern between industries is also true for annual incentive plan payouts, indicating that payouts across annual and long-term plans are generally aligned and reflective of performance.

Average payouts for each industry are distributed as indicated in the following chart: 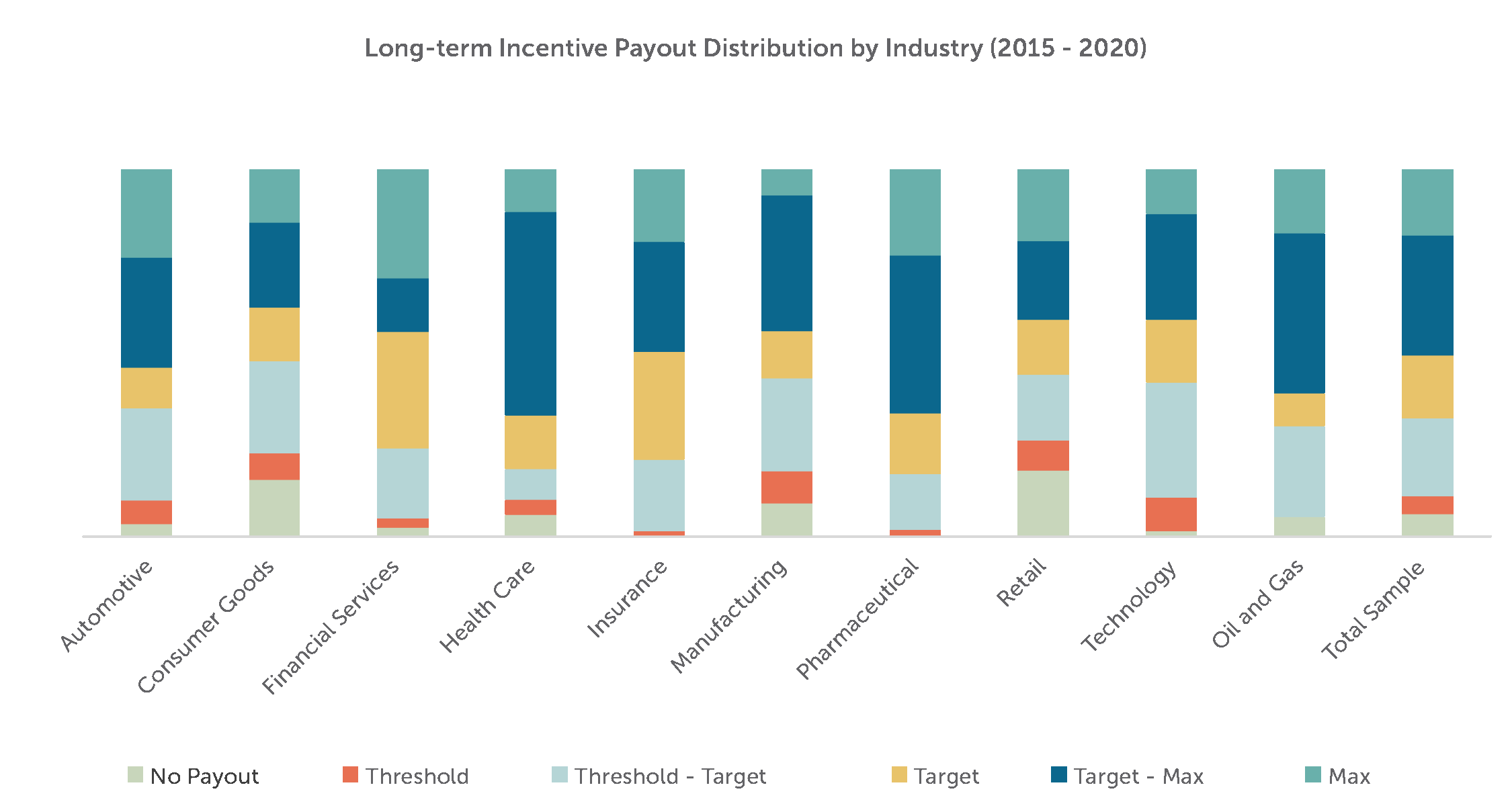 Our research indicates that over the last six years companies set long-term performance goals that translated to:

Over time, however, we may see these patterns change as companies continue to consider how longer term non-financial priorities, such as ESG objectives, digital transformation, and market share, best fit in their compensation program.

CAP reviewed payouts under long-term incentive plan performance cycles that ended in 2015-2020 to determine the distribution of payouts and the frequency with which executives achieve target payouts. In this analysis, CAP categorized long-term incentive payouts (as a percentage of target) into one of six categories based on the following payout ranges: