CAP analyzed annual incentive plan payouts over the past ten years for 120 companies from ten industries with median revenue of $34 billion. We selected these companies to provide a broad representation of market practice across large U.S. public companies. This study is a continuation of studies we conducted in 2015 and 2017.

Annual bonuses are an important tool that companies use to reward executives for achieving short-term financial and strategic goals. Setting appropriate annual performance goals is essential to establishing a link between pay and performance. The challenge is for goals to achieve a balance between rigor and attainability, amidst expected industry and economic factors, in order to motivate executives to drive company performance and create shareholder returns.

For the purposes of this study, we categorized annual incentive plans as either goal attainment or discretionary. Companies with goal attainment plans set pre-established threshold, target and maximum performance goals and corresponding payout opportunities. Alternatively, companies with discretionary plans use judgment to determine payouts at year-end based on a retrospective review of performance results with no predefined relationship between goals and payouts.

Our study focuses on the 87 percent of companies with goal attainment plans. 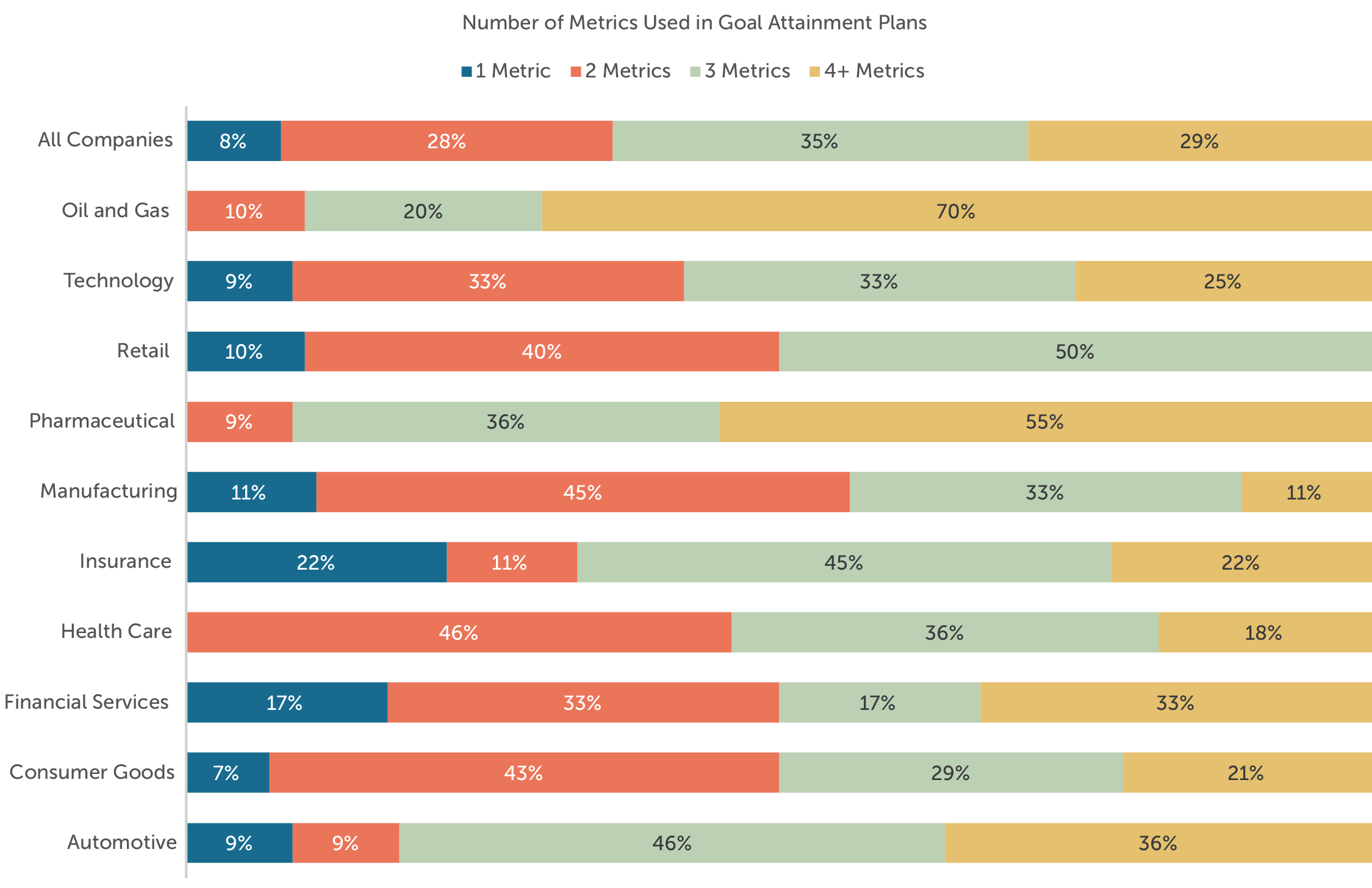 The most prevalent financial metrics used to fund annual incentives are Operating Income (including EBIT, EBITDA, and Pre-tax Income), Revenue, and EPS.

We have seen an increase in the use of strategic or nonfinancial metrics with just over a third of the companies in our current study using them. These metrics incentivize behaviors that contribute to long-term success but may not be captured by short-term financial performance. Specific strategic or nonfinancial metrics vary by industry and company. For example, pharmaceutical companies often use pipeline metrics and oil and gas companies often use safety and environmental metrics. We expect the recent uptick to continue as more companies place greater emphasis on Environmental, Social, and Governance (ESG) metrics in annual incentive plans. Arguably, the more that companies use strategic and nonfinancial performance goals, the more important it is to ensure that plans and payouts are appropriate and affordable from a cost perspective.

Based on CAP’s analysis over the ten-year period, the degree of “stretch” embedded in annual performance goals translated to a: 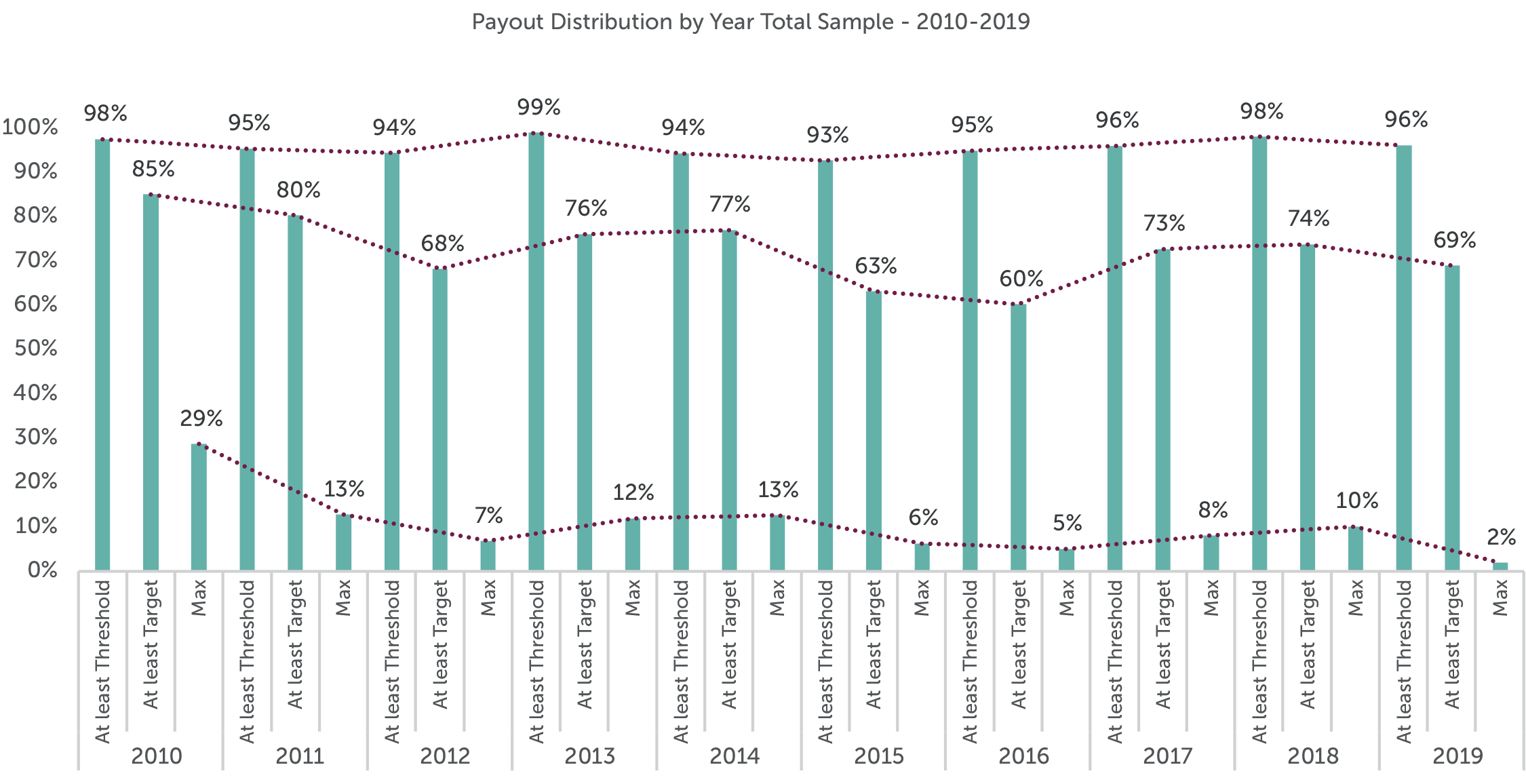 This may indicate that following 2008 and 2009, companies were hesitant to set overly challenging goals or had subsequent growth and performance that exceeded their expectations.

Our study found that select industries have payout distributions that fall outside the norms of the broader group. Companies in the pharmaceutical and insurance industries achieved target performance goals more often than the broader group and paid at or above target 90 percent and 85 percent of the time, respectively, versus 70 percent for the full sample. Conversely, companies in the consumer goods and retail industries, where revenue growth has lagged that of other industries, achieved target performance just 60 percent of the time. Several factors may contribute to differences in payout distributions by industry, including metric selection, goal setting, and performance results.

When we look at TSR over the period from 2010 to 2019, the pharmaceutical and insurance companies had higher median TSR than the consumer goods and retail companies. Though TSR is not a metric that is typically used to determine annual incentive payouts, this relationship indicates that payouts were ultimately tied to the shareholder experience.

Average payouts for each industry are distributed as indicated in the following chart: 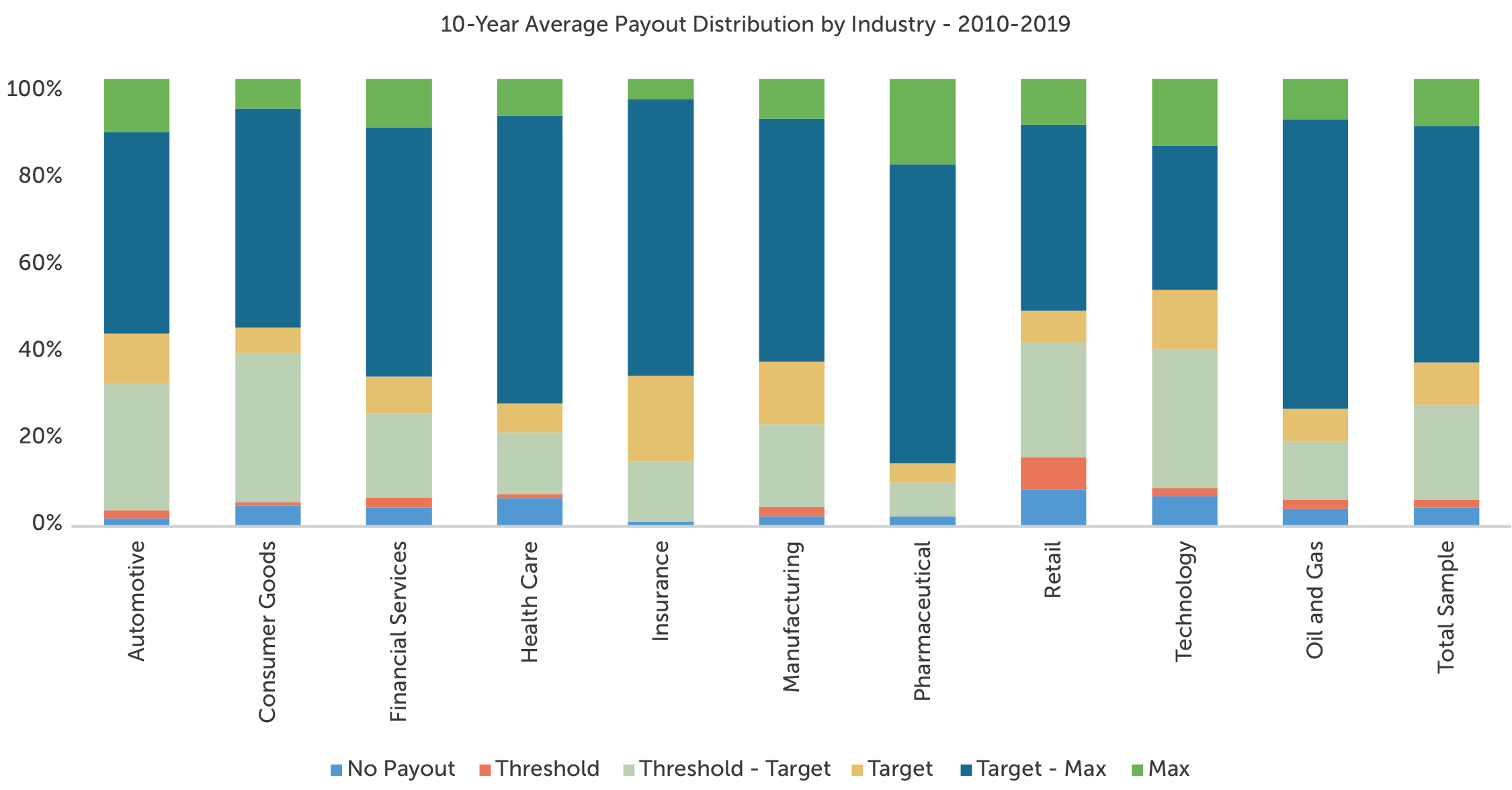 CAP reviewed the relationship between annual incentive payouts and annual company performance over the ten-year period with respect to three metrics: Revenue growth, EPS growth and Operating Income growth. Payouts were fairly aligned with Revenue, but most closely tracked with Operating Income and EPS growth over the period studied (2010-2019). Companies may seek to align bonus payouts with profitability because it reflects a company’s ability to pay bonuses and captures an executive’s ability to control costs and improve operational efficiency.

The chart below depicts the relationship between median Revenue, EPS, and Operating Income growth and above target annual incentive payouts among the companies studied.

Given the impact of COVID-19 on financial results, 2020 is shaping up to be a very different year. Payouts for 2020 performance will likely be more erratic by industry and by company. The expectation is that most companies will pay near or below target. Companies in select industries, such as pharmaceuticals, may pay higher bonuses and struggling companies may pay none. Companies will likely use discretionary assessments of performance and, in some cases, use discretion to fund bonus pools altogether, recognizing the challenges of the year. We have already seen that 17 companies with fiscal year ends between May and June 2020 made adjustments to results, modified performance metrics, goals, or measurement periods, or used some discretion in plan funding. Overall, payouts for 2020 performance will likely be below historic norms, reflecting a significant departure from the last ten years during which companies paid at or above target 70 percent of the time.

The new year will continue to present challenges and uncertainties. 2021 is likely to be a challenging year in terms of planning and goal setting, and if COVID-19 and its impact still linger, businesses will be affected operationally and financially. This suggests that payouts could again be lower in 2021 for many companies. Alternatively, companies may use more discretion in overall plan funding, or carve out a greater portion of funding for strategic, nonfinancial, or individual performance goals. In this case, payouts could be somewhat higher than what would be expected based on pure financials and the degree of economic stability.

Our research indicates that over the last ten years companies set performance goals that translated to:

While the typical payout patterns may look different for 2020 and 2021 (not unlike 2008 and 2009), this 10-year lookback provides a pattern and distinct guidelines that companies can use to assess their actual payouts and established goals over the longer-term.

CAP reviewed actual annual incentive payouts earned for performance over the ten-year period from 2010-2019 to determine the distribution of incentive payments and the frequency with which executives typically achieve target payouts. In this analysis, CAP categorized actual bonus payments (as a percentage of target) into one of six categories based on the following payout ranges: