Having a workforce and leadership team that mirror the society in which the company operates is important for several reasons, beyond being the right thing to do. Companies with employee and leadership diversity have more positive cultures and committed employees, and studies have shown these companies tend to have greater profitability and higher returns. The events of 2020 accelerated efforts in corporate America to make progress in this important area. This study analyzes the representation by women and racially/ethnically diverse individuals in the 50 largest U.S. public companies and reports other disclosed diversity and inclusion (D&I) efforts. Compensation Advisory Partners (CAP) is focusing on the largest U.S. public companies because they are highly visible and receive intense shareholder and public scrutiny. As a result, these companies’ actions become precedents, and the companies become the de facto “trend-setters” for their respective industries.

CAP’s Diversity and Inclusion Report reflects the largest 50 companies in the S&P 500. These companies have revenues ranging from $75 billion to $156 billion and represent a cross-section of eight industry sectors. We focus on larger companies because they can provide early insights into trends for their respective industries. Summary statistics for the 50-company sample are shown below:

Board and Employee Representation

Among the 50 companies, 82 percent of boards are led by white men, either as the non-executive chairman of the board or lead independent director. Only six boards are led by women, and three are led by a man of color. However, none of the company boards in the sample are led by a woman of color, a demographic group that has been severely lacking in representation in corporate leadership. While 68 percent of the companies have Black women on their boards, only 34 percent have Black women as committee chairs.

Shareholders have been requesting boards to take more ownership of diversity and inclusion (D&I) efforts in the organization. Among companies in our sample, 22 proposals were filed in recent proxies regarding topics related to diversity, pay equity, and race. Most proposals requested that boards release pay equity and/or diversity data, add environmental, social and governance (ESG) goals such as diversity to executive compensation plans, and/or increase diverse representation on boards. While none of these proposals received majority shareholder support, one received more than 35 percent support with a request for U.S. Equal Employment Opportunity Commission EEO-1 Survey disclosure. CAP expects to see more shareholder proposals related to diversity and inclusion in proxies released in 2021.

In the 50-company sample, three companies disclosed in recent proxies that they have adopted the “Rooney Rule” to fill Board positions, requiring their Nominating and Governance Committees and third-party search firms to interview diverse candidates. The Rooney Rule, used in the National Football League, requires teams to interview at least one minority candidate for head coaching, senior operations, and general manager positions. The intent of the rule is to increase diversity in recruiting, which can help to increase diverse representation in leadership roles. CAP anticipates that more companies will begin to use the principles of the Rooney Rule to promote diversity in the recruiting process for both board service and management positions. 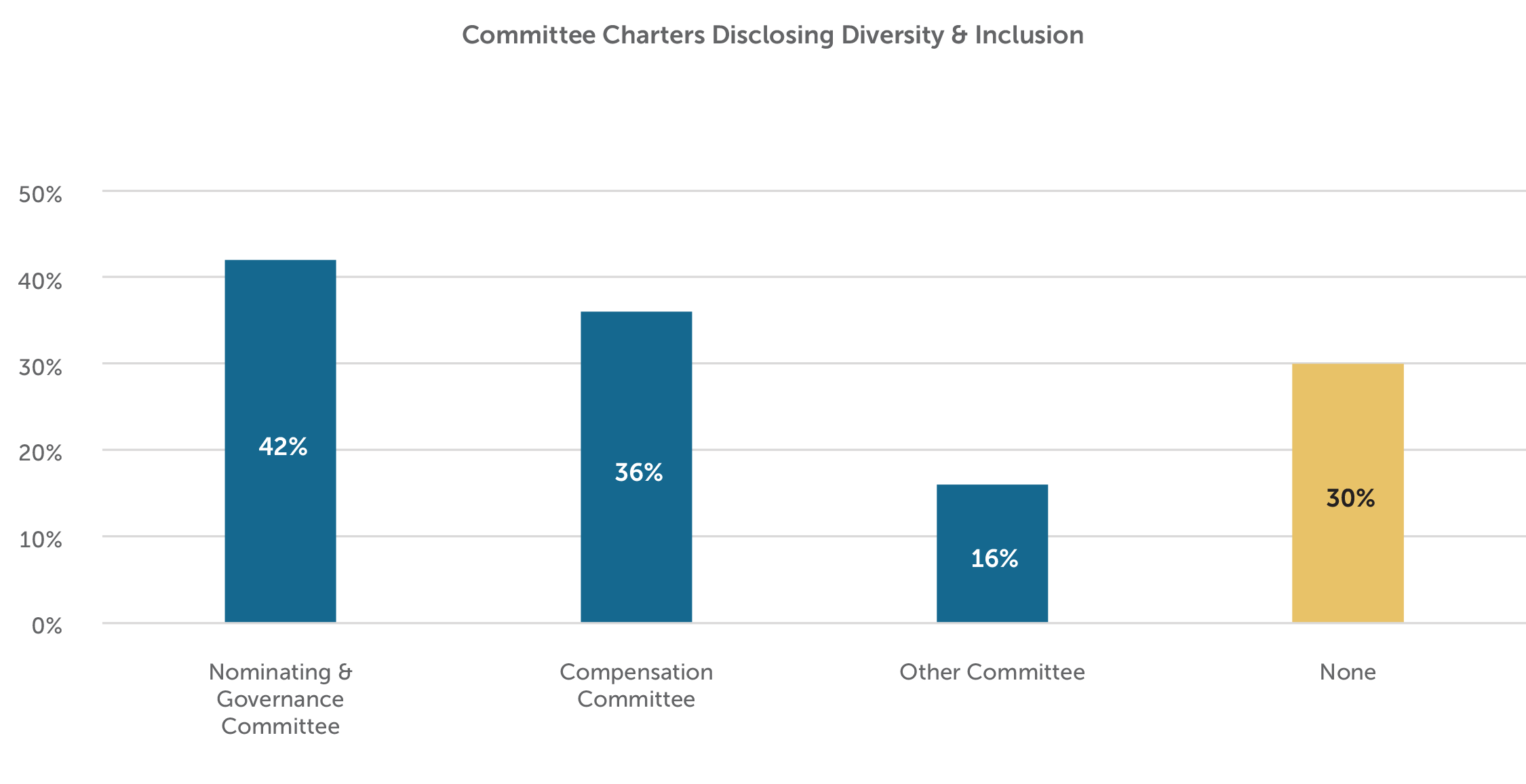 No overnight fix exists to increase representation in a company’s workforce and leadership pipeline. Increasing minority and female representation requires an investment in attracting, developing, and retaining a diverse workforce. Some high-profile companies (including several not included in this study) have publicly committed to recruiting from Historically Black Colleges and Universities and investing in minority communities to improve racial diversity. In addition to these efforts, companies also highlight other endeavors to promote diversity and inclusion, including reporting on diverse supplier spending, support of professional associations for minority and female employees, as well as attrition goals for minority employees. Companies have also recently disclosed other diversity initiatives including company donations and matching charitable contributions to racial justice charities in the wake of recent national protests.

Shareholder scrutiny will continue to put pressure on companies to address gender and racial diversity, particularly at the board and management level. Directors and management should annually review their employee demographics, even if they do not disclose this information publicly, so that they can monitor and set goals to create a more diverse and inclusive workforce and build a diverse pipeline for leadership positions. The two major proxy advisory firms, Institutional Shareholder Services (ISS) and Glass Lewis, issued recent policy updates requiring board representation by women and racially/ethnically diverse individuals at certain public companies to receive positive vote recommendations on certain management proposals. While this will no doubt accelerate diversity efforts at the board level, if companies do not also foster a more inclusive culture, retention may become a key issue. Growing an inclusive culture at the board level may require companies to go beyond the minimum ISS and Glass Lewis representation standards. Given the positive impact of diversity and inclusion on the bottom line, CAP expects shareholder pressure to continue well into the future.

About the data: The data was obtained through public filings such as proxy statements and diversity or governance reports found on company websites.