Last year, Compensation Advisory Partners’ study on the pay levels of Chief Financial Officers (CFOs) and Chief Executive Officers (CEOs) revealed that compensation levels for both executives were increasing at similar rates, reflective of a rebounding economy and the linkage between incentive levels and company results. To determine if this trend is continuing, we conducted a similar study this year using a larger sample set of 64 US public companies. Consistent with last year, the study analyzes executive pay data disclosed by early proxy filers with revenues ranging from $1 to $150 billion, with median revenues of $10 billion. Only companies with the same CEO and CFO incumbents from 2009 to 2011 were included in order to focus on year-over-year changes for an individual. Financial services firms were excluded from the study as this industry, in particular, saw the emergence of several atypical compensation arrangements and special awards that were both temporary and unique to the industry.

Our findings, summarized below, indicate that overall, increases in pay levels for both CFOs and CEOs have moved from double-digit figures in the 2009-2010 period to single-digit figures in the 2010-2011 period, suggesting pay actions that are more reflective of a stabilizing economy. Pay increases in both periods were higher for CFOs compared to CEOs, driven by higher increases in short-term compensation. On an absolute basis, CFO pay continues to be approximately one-third of CEO pay.

Overall, actual total direct compensation (salary plus actual annual incentive plus the present value of long-term incentives) for both CFOs and CEOs continued to increase but at much lower rates in the 2010-2011 period compared to 2009-2010, as illustrated in the chart below. These lower, single-digit increases in pay levels are indicative of a stabilizing economy. The salary and actual bonus increase levels themselves continued to be higher for CFOs in the 2010-2011 period than for CEOs. Long-term incentives proved to be the biggest driver of pay increases from 2010 to 2011, however, rising by 10% for both CEOs and CFOs.

In terms of target compensation levels, the overall pay mix remained largely unchanged from 2009 to 2011, with a greater emphasis on at-risk pay for CEOs than for CFOs. 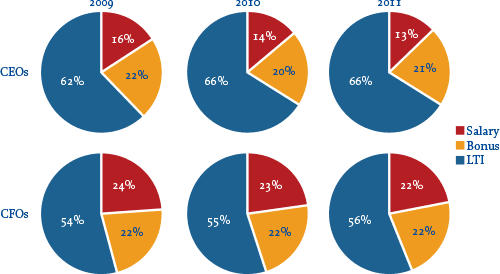 The majority of companies continue to award LTI to both CEOs and CFOs using at least two incentive vehicles. The role of stock options has declined in the overall mix companies use to deliver LTI. And on average, performance-based LTI now comprises approximately 50% of LTI for CEOs and CFOs, an increase of approximately 10% over the past three years. Data shows 80% of CFOs and 85% of CEOs received some form of performance-based awards as part of their LTI program in 2011.

In the last three years, trends in CFO pay have been directionally aligned with trends in CEO pay. While the rates of increases were higher for CFO’s 3 years ago, and have started to moderate compared to earlier years, trends for both positions indicate a pronounced linkage to performance, particularly through the long term incentive program.

While volatility in the economy may be stabilizing somewhat, we expect the performance linkages to remain strong for these two key positions. With the continued emphasis at the executive and board level on strong financial skills, talent and acumen, companies will continue to pay competitively for those in the CFO role.