The Dodd-Frank Wall Street Reform and Consumer Protection Act (“Dodd-Frank”) requires federal regulatory agencies to prescribe rules that would prohibit certain financial institutions from offering incentive compensation that, in the regulators’ determination, could expose the institution to inappropriate risks that could lead to material financial loss.

This resulted in significant new reporting requirements for banks and other financial institutions with $1 billion or more in consolidated assets regarding incentive compensation arrangements for Tier 1, Tier 2 and Tier 3 Covered Employees.1,2

To “improve” practices and require conformance with the Sound Guidance, in late 2009 the FRB began a multi-disciplinary horizontal review of incentive compensation arrangements at 25 large complex banking organizations (“LCBOs”). This led to an iterative pay program design process, as regulators now need to “sign off” on compensation program design for all Covered Employees. Based on client experience and a review of 2012 LCBO proxy statements, we have identified key themes concerning what has been done to-date to move towards substantial conformance with FRB requirements.3

With the goal of “de-leveraging” incentive pay programs and placing more focus on long-term performance and risk outcomes, some LCBOs have re-balanced the pay mix for senior executives. This typically includes a combination of: 1) increasing base salaries; 2) reducing annual incentive award opportunities; 3) increasing the mandatory deferral rate for a portion of annual incentive awards.

To ensure alignment of compensation with long-term performance and risk outcomes, proposed regulations require that at least 50 percent of incentive compensation (annual + long-term) be deferred over a period of at least 3 years (ratable vesting is acceptable), for specific Tier 1 executives at covered financial institutions with total assets of at least $50 billion (minimum deferral under proposed regulations; Dodd-Frank §956).

Currently, the portion of incentive compensation deferred at LCBOs is substantial and exceeds the minimum guideline. Many of these companies have additional stock retention requirements after deferred compensation vests.

Regulators also require that the deferred amounts be subject to: “performance adjustment for losses (or other measures or aspects of performance) that are realized or become better known during the deferral period.” These risk (and performance) adjustments are expected prior to the grant of incentive compensation (ex-ante / upfront) as well as post-grant and prior to vesting (ex-post / look-back).

In terms of ex-ante adjustments, all but one LCBO (93 percent) disclosed in its most recent proxy statement an annual risk review prior to payment of incentive compensation that can modify payout. Most companies disclosed a highly discretionary process (more structure likely exists), while 20 percent specifically described use of a risk/compliance scorecard.

CAP Perspective: These new concepts / design will cascade down in organizations, and create additional work for cross-functional teams.

CAP Perspective: The FRB does not recognize market-based (stock price) adjustments alone as an adequate form of risk-based performance adjustment.

Measuring absolute (internal) performance against pre-established goals is the most common approach used by the LCBOs to determine bonus payments for senior executives. The goals are most often made up of multiple performance measures. The most prevalent metrics relate to profitability (for example, EPS), followed by return/efficiency metrics (for example, ROE).

Additionally, as a risk management technique, we observed that about 20 percent of LCBOs have reduced annual incentive plan upside leverage, by either reducing target opportunities or capping maximum payout opportunities. 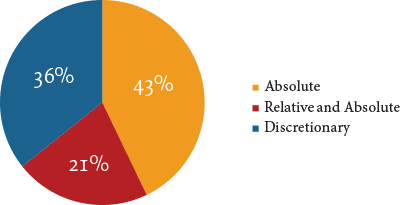 CAP Perspective: We also expect to see an increased use of risk-focused measures, such as use of a minimum capital level as a 162(m) funding requirement. 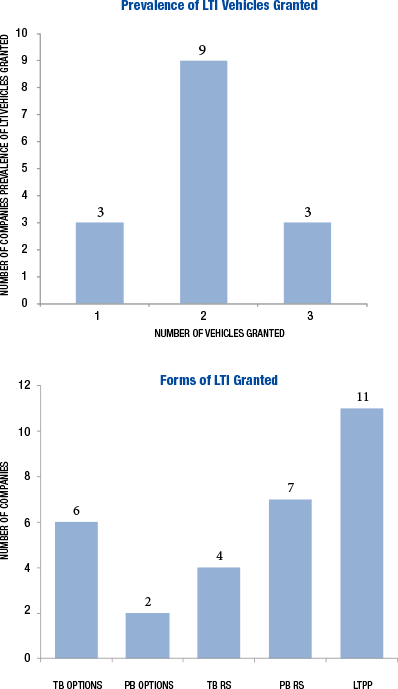 CAP Perspective: Stock options have been de-emphasized in the proportion of the long-term incentive award that they represent due to recent stock price volatility and outside criticisms.

CAP Perspective: Stock options are not seen as appropriately performance-based among regulators. There is concern that value can be realized based on macro economic conditions, rather than company-specific events/financials, particularly over a 10 year timeframe. Attaching some form of ex-post performance-based adjustment can provide risk-balancing features.

In addition to traditional long-term goals tied to the business plan, relative performance or stock price, companies have been adopting secondary performance conditions, in reaction to the Final Guidance, intended to significantly reduce or eliminate unvested deferred incentive payments (post grant, an ex-post adjustment) if a risk event were to occur. These adjustments are designed to be done on a formulaic basis, discretionary basis, or both.

When designing a long-term incentive program, it is also important for financial institutions to consider accounting implications.

CAP Perspective: Truly new designs are being implemented, and it seems that some may lead to variable accounting for equity vehicles. Awards may lack a true grant date, resulting in variable accounting, if a discretionary risk assessment subjects the awards to reduction up until vesting. This can lead to increased cost / volatility in expense and therefore create a reason to consider providing a portion of long-term incentive compensation through a cash-based vehicle.

While all of the LCBOs have some form of stock ownership requirement, most have requirements for senior executives that go beyond traditional ownership guidelines (multiple of base and/or number of shares that must be achieved within a certain number of years).

CAP Perspective: The most rigorous requirement for executives – an ongoing retention ratio – is most common.

As most public companies await final SEC regulations, the horizontal review banks have begun to make comprehensive changes to their existing clawback policies. The horizontal review banks have a clawback provision that goes beyond what is required under Sarbanes-Oxley or Dodd-Frank legislation (SEC has not yet proposed rules). These clawback provisions are part of multiple programs and can impact different employee populations or pay elements for varying reasons.

CAP Perspective: Based on disclosed policies, it is noteworthy that “inattention to risk” is a triggering event among 40 percent of the horizontal review banks.

CAP Perspective: In our experience, most companies have yet to think through how they would implement a clawback of previously paid compensation, should one be triggered. This will likely be a complicated process, with a number of legal and tax considerations for both the employee and the company.

Compensation design and governance practices have been changing at LCBOs at an accelerated pace since the horizontal review process began and the Final Guidance was issued. Change will continue among these organizations, and will spread to other large (and smaller) financial institutions. While the regulations are focused on the largest banks ($50B+ in consolidated assets), the design practices discussed above will be increasingly relevant for financial institutions of all sizes.

There are now greater expectations for Board oversight, enhanced controls and related policies, and documentation for incentive plans and risk mitigation strategies. To comply, the Compensation Committee and a cross-functional senior management team must be fully involved, well-informed and possess an in-depth understanding of incentive arrangements for all Covered Employees.

Research assistance for this CAPFlash was provided by: Deep Patel, Devika Ray and Chelsea Carter.

1 These companies are required to disclose the structure of their incentive-based compensation arrangements to appropriate federal agencies.

2 As described in the Interagency Guidance, the full set of employees who may individually or collectively expose the firm to material amounts of risk are together referred to as “Covered Employees.”

3 16 LCBOs are U.S.-based. Our analysis focuses on these companies excluding Ally Financial (where the U.S. government remains the majority owner). Data found in proxy disclosures is most relevant to Tier 1 Covered Employees (senior executives).