Among the 44 company sample, median revenue was $11B, median market capitalization was $23B and median 12 month Total Shareholder Return (TSR) was 27% at the end of February 2014.

In 2014, all Early Filers that released SOP results to-date (n=38) received majority shareholder support and 87% of companies received greater than 90% support. Among these companies there has been a steady uptick in the level of support at the 25th percentile over the last four years. 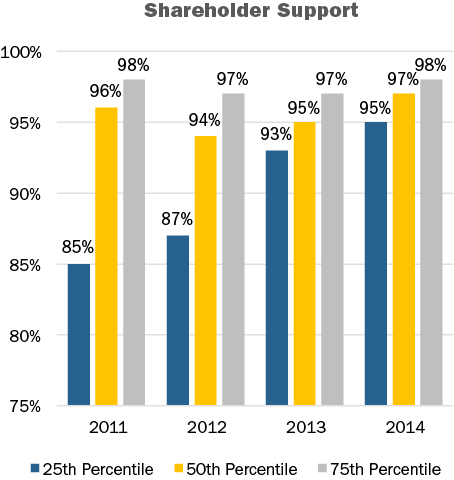 CHANGES IN SHORT AND LONG-TERM COMPENSATION

CAP Comment: The average executive base salary increase among the Early Filers is consistent with projected merit increases in the broader market where we are generally seeing 3.0% increases for 2014.

Bonus payouts as a percent of target for the Early Filers increased slightly at the median. The median CEO bonus payout for 2013 was 100% of target compared to 97% in 2012. In general, there was a slight shift upwards in the bonus payouts when compared to the prior year. This is in-line with overall expectations as companies’ earnings and income also had modest growth year-over-year. 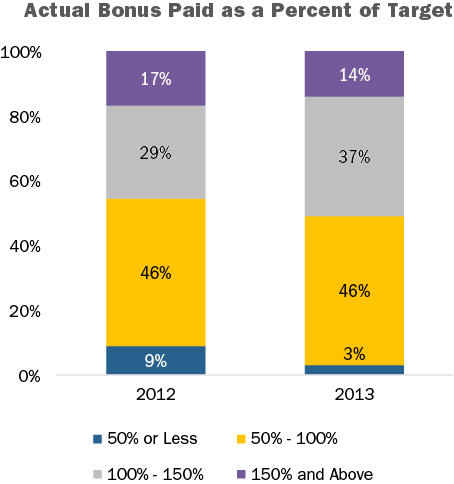 CAP Comment: Year-over-year financial performance results are aligned with CEO bonus payouts for the Early Filers. Companies are putting more time and effort into the goal setting process to ensure an appropriate pay and performance alignment; investors and proxy advisory firms increasingly focus on the performance goals and rigor of the incentive plan targets.

Over the last two years, the portion of the LTI mix delivered in a performance-based vehicle has increased in the general market. Early Filers showed a continuing, consistent shift, placing more emphasis on performance-based LTI and less emphasis on stock options; the weighting on time based restricted stock remained flat. 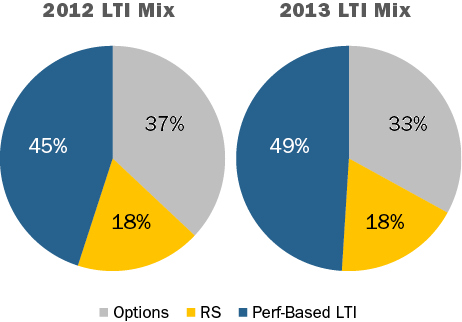 Approximately 85% of the Early Filers use two or three vehicles to deliver their long-term incentives.

CAP Comment: A general trend over the last couple of years has been a de-emphasis on stock options as part of the LTI program and an increase on the portion of performance based LTI. ISS is supporting this shift as they do not consider options to be performance-based.

Companies continue to modify their compensation programs as they reassess program features in light of business/strategic changes and/or evolving shareholder and proxy advisory groups’ hot buttons. 36 of the 44 companies (82%) we researched disclosed making a change to their compensation programs or policies. The most prevalent change among the Early Filers was a modification to the company’s benchmarking peer group. Peer group changes are typically a result of companies trying to better align the peer group median size with that of their own company.

CAP Comment: Modifications to a company’s peer group is common as Compensation Committees and management review appropriate peers for benchmarking on an annual or biennial basis. Given that ISS and Glass Lewis consider a company’s peer group when conducting their analyses, it is another reason that assessing the appropriateness of peer companies is a valuable exercise.

Similar to last year, companies continue to modify their clawback policy as a sign of good corporate governance. Companies are not universally waiting for final Dodd-Frank regulations before making adjustments to their policy. The uptick in the disclosure of hedging/pledging policies also continued, and overall, 86% of Early Filers disclose having both. Lastly, 14% of Early Filers voluntarily disclosed a supplemental table, graph or discussion of realized/realizable pay. In-line with CAP’s recent research on this topic and disclosure in 2013 proxies, these companies tend to compare realized/realizable pay with target or Summary Compensation Table pay values, as well as alignment with TSR.

While the Early Filers research is a sneak preview into the upcoming proxy season, we expect to see directionally consistent trends with these changes and practices indicated from our research. Companies are continuing to demonstrate good corporate governance and policies / programs that enhance company performance and pay linkages. Since there have not been significant changes in proxy advisory firm policies or expanded Dodd- Frank legislation, we do not expect to see significant program overhaul in the current proxy season. Companies with low SOP support will likely disclose more significant program modification.

1 Calendar year-end companies were not included in the analysis.

2 Based on companies whose current CEO has held the position for two years.