Several years ago, pay levels for Chief Financial Officers (CFOs) were increasing at a faster rate than other C-suite executives, including the Chief Executive Officer (CEO). This more dramatic increase was partially explained by the evolving role of the CFO. While always an integral member of senior management, the role of the CFO has become an increasingly important position at major companies with extra demands given the volatility in the economic environment, investor expectations and scrutiny. Additionally, CFOs were intimately involved in dealing with the impact of the financial crisis, resulting in a greater oversight role and interaction with the Board of Directors.

To determine if this trend is continuing, Compensation Advisory Partners conducted a study to determine how CFO pay has changed over the last three years and how the year-over-year trends in compensation compare to trends in CEO pay. The study analyzes executive pay data disclosed by early proxy filers and includes 55 US public companies with revenues ranging from $1 billion to $150 billion, with median revenues of $10 billion. Only companies with the same incumbent CEO and CFO from 2008 to 2010 were included in order to focus on year-over-year changes for an individual. Financial services firms were excluded from the study as this industry, in particular, saw the emergence of several atypical compensation arrangements and special awards that were both temporary and unique to the financial services industry.

Our findings, summarized below, indicate that CFO pay is generally moving at the same rate as CEO pay. Salaries are increasing at a slightly faster rate for CFOs but incentive compensation, both annual and long-term, is moving at the same rate for CFOs and CEOs, illustrating that incentive levels are tied to company results. For 2010, incentives are up for both CFOs and CEOs, reflective of a slowly rebounding economy.

Overall, actual total direct compensation (salary plus actual annual incentive plus the present value of long-term incentives) for both CFOs and CEOs slightly declined in 2009 and subsequently rebounded in 2010, as illustrated by the chart below. CFO pay fell at a slightly higher rate in 2009 and increased at a higher rate in 2010 compared to CEO pay. The rise in 2010 pay levels was primarily due to increases in incentive (performance-based) compensation. Bonuses increased by approximately 16% and LTI increased by 14% – 19%. These increases in incentive compensation are most likely reflective of the recovering economy, improvements in company financial performance and rebounding stock prices. 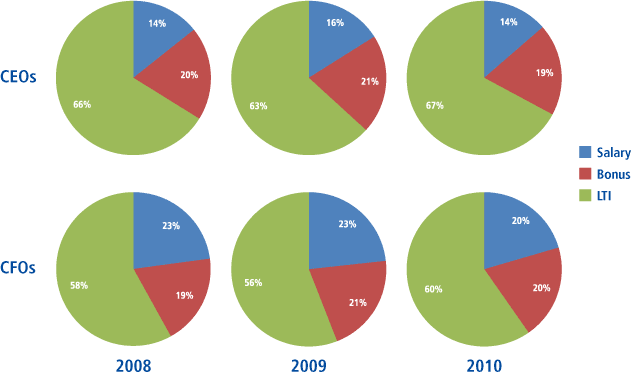 The majority of companies awarded LTI to both CEOs and CFOs using at least two vehicles. The prevalence of stock options in the LTI mix declined over the 3-year period while the prevalence of performance-based awards increased. Overall, 83% of CFOs and 85% of CEOs received some form of performance-based awards as part of their LTI program in 2010.

Number of LTI Vehicles Used in 2010

The majority of LTI continues to be delivered in the form of stock options and performance-based LTI, with less emphasis on restricted stock.

In the last two years, trends in CFO pay have been directionally aligned with trends in CEO pay. The target pay mix for CFOs has slightly increased the emphasis on incentive compensation relative to fixed compensation, moving closer to the pay mix of CEOs. Salaries are increasing at a faster rate for CFOs but incentive compensation is increasing at about the same pace for both CFOs and CEOs, indicating a link to company performance results, and emphasizing that the role of the CFO continues to be important. We expect companies to continue to ensure that they have the right skill set in the CFO role and develop compensation programs that attract and motivate key talent.