Compensation Advisory Partners (CAP) reviewed executive compensation pay levels and trends at 50 companies (Early Filers) that filed their most recent proxy statement between November 2016 and January 2017 (fiscal year ends from July 2016 to October 2016; 35 companies have September 30 fiscal year ends). Industry sectors reviewed include: Consumer Discretionary, Consumer Staples, Financials, Health Care, Industrials, Information Technology and Materials. Among these 50 companies, median Revenue was $6.1B, median Market Capitalization (based on each company’s fiscal year-end) was $9.0B and 1-year Total Shareholder Return, or TSR (based on each company’s fiscal year-end) was 18.4%.

2016 was a year marked with global political uncertainty partly due to the Brexit vote in June, the U.S. presidential election in November and the continued unrest in the Middle East. Despite these challenges, 2016 financial performance was generally flat (+/- 3%) for the second year in a row. However, 2016 TSR performance was much stronger than 2015 performance despite market uncertainty. CAP reviewed Revenue growth, Pre-tax Income growth, EPS growth and TSR performance for the Early Filers and the S&P 500.

CEO actual total direct compensation increased modestly (5.5%) among Early Filers with CEOs in their role for at least two years (n=42) driven by increases in annual incentive payouts and the grant-date value of LTI awards. Annual incentive payouts, at median, were nearly 6% higher over prior year. Although year over year financial performance was relatively flat, companies typically adjust incentive plan metrics to exclude factors that may be outside an executive’s control (e.g., currency fluctuation) which can result in higher incentive plan achievement compared to GAAP performance. Median base salaries for CEOs in our sample were unchanged from prior year.

(1) Financial performance and TSR is as of each company’s fiscal year end.
(2) Excludes 1 company that eliminated its annual incentive program beginning in 2016.

Across all companies reviewed, Profit growth (typically EPS or Operating Income), Revenue growth, and Cash Flow growth were the most commonly used metrics in the annual incentive plan design. Typically, companies place more emphasis on profits with most allocating at least 50% of the total award on profit-based metrics.

Most companies use 2 – 4 metrics in the annual incentive plan design which allows companies to balance an executive’s focus on the many aspects that define its success. This approach also provides some risk mitigation so that executives are not concentrating on a single metric potentially at the expense of other meaningful financial measures. A minority of companies (8) in our sample use only 1 metric in the annual incentive plan, with most of these companies using a profit-based metric.

Among early filers, performance-based awards are the most prevalent long-term incentive vehicle provided to executives as companies continue to ensure executive pay is aligned with longer term company and stock price performance. However, companies in our sample do continue to provide stock options and time-based restricted stock awards, although these vehicles reflect a smaller portion of total LTI (28% for stock options and 20% for time-based restricted stock). Most companies reviewed deliver equity in the form of 2 – 3 vehicles which helps to balance the link with longer term performance. 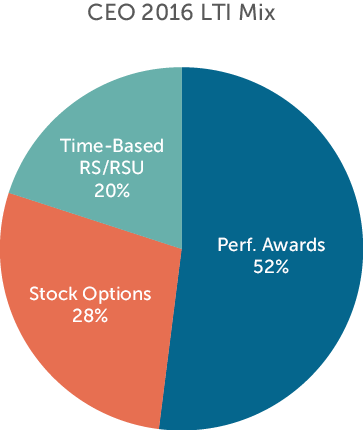 For companies that grant performance-based awards, the most common metrics are TSR, profit-based growth and return measures (e.g., ROE, ROA and ROIC). 67% of companies use TSR, 57% use a profit-based metric (with EPS used most often) and 31% use a return measure. Similar to annual incentive metrics, companies use multiple metrics (typically 2 – 3 metrics) in performance-based awards. Among the 12 companies that use only 1 metric, 50% use company financial performance (typically a profit-based metric) while 50% rely solely on relative TSR. However, TSR is most commonly used with other metrics or as an award modifier. Over the last several years, more companies have been incorporating relative TSR as a long-term measure to address multiple issues including: setting credible long-term goals, using measures that can be understood by participants and aligning with proxy advisory firms’ pay-for-performance assessments. We would expect that the use of TSR will plateau particularly as firms, like ISS, begin to use financial performance measures in their pay-for-performance assessments.

2016 performance, overall, was generally flat year over year which resulted in annual incentive payouts that were around target for the second year in a row and modest pay increases, through incentives, for the CEO. 2017 will likely be a year of uncertainty as political outcomes from 2016 (e.g., Brexit and the U.S. presidential election) may impact international trade deals, U.S. federal regulations and consumer confidence which could impact economic performance. We would expect many companies to take a wait and see approach before making wholesale changes to their annual or long-term incentive plan design.