2015 was a year that included an increase in the value of the U.S. dollar, volatility in foreign currency exchange rates and a slowdown in economic growth overseas (particularly in China). These factors contributed to 2015 performance being weaker than 2014 performance. CAP reviewed Revenue growth, Pre-tax Income growth, EPS growth and TSR performance for the Early Filers and the S&P 500. For the measures reviewed, 2015 performance was generally flat (0 – 3% growth) compared to the strong performance of 2014.

Among Early Filers with CEOs in their role for at least two years (n=42), 2015 actual total direct compensation increased 13% over 2014 pay levels. 2015 annual incentive payouts were down 3% reflecting weaker financial performance compared to the prior year. LTI grants in 2015, however, were significantly higher than 2014. This finding is likely reflective of the timing of LTI grants (typically in the first quarter of the fiscal year) and companies likely providing larger grants in 2015 because of the strong performance in 2014. Consistent with the expected salary increases, 2015 base salary was 3% higher than 2014.

(2) TSR for Early Filers is as of each company’s fiscal year end. 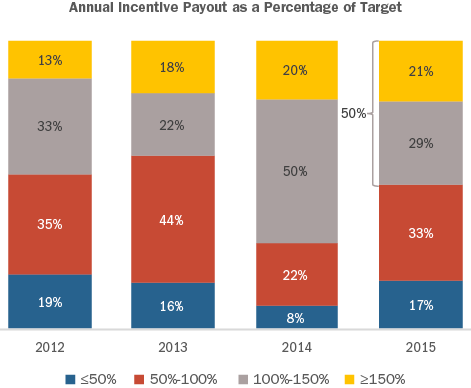 (1) Reflects only those companies with a performance share plan.

Since Say on Pay was adopted in 2011, companies have incorporated many new features to make their proxy statement a communications document for shareholders by including a proxy summary, an executive summary in the CD&A and highlighting good governance practices, just to name a few. While Early Filers generally did not make wholesale changes to their proxy statement in 2016, some companies enhanced their disclosure with additional charts and graphs. Some examples include:

We would expect that companies will have more significant changes to the proxy statement as more rules under Dodd-Frank (e.g., pay ratio and pay vs. performance) are finalized and implemented.

2015 was not as strong of a performance year as 2014. Given weaker 2015 performance, annual incentive payouts declined from 2014 levels resulting in a directional alignment between pay and performance. 2016 is already shaping up to be an interesting year given recent declines in stock price, currency fluctuations and overall uncertainty given the U.S. Presidential election. Many companies will be making their annual equity grants at depressed stock prices, so we may potentially see a year over year decline in LTI grant values particularly for those companies that grant awards based on a fixed number of shares. From an executive compensation perspective, we expect that the SEC will come out with final rules for the clawback, hedging and pay vs. performance in October 2016 which could have an impact on 2017 and 2018 disclosure.