32% of companies in CAP’s database changed their annual incentive plan design in 2014 or 2015. The most common changes were modifications to the performance metrics used to fund awards and increases to the target award opportunities offered to the CEO or CFO. Another common change was to adjust the weightings/mix applicable to performance metrics. These changes, as well as other modifications shown in the chart below, illustrate that companies continue to review and enhance the pay-for-performance relationship through changes to the annual incentive program.

Changes made by many companies were done so to better align incentives with their business strategy:

CAP’s database tracks the size of target annual bonus awards for both CEOs and CFOs. When we looked across all industries in 2014, we found that the median target bonus opportunity increased for CEOs by 10 percentage points to 170% of salary. By industry, the largest increase we saw was in Automotive, where CEO target bonus awards increased by 15 percentage points. Significantly, none of our industry groups registered a decline in CEO target annual bonuses, although Financial Services do not typically define target bonuses.

When we looked across all industries at CFO target bonus opportunities, we saw no change year-over-year. The median target bonus for CFOs remained the same at 100% of salary. By industry, Technology CFOs saw the greatest increase (25 percentage points). Across other industries, median target CEO/CFO bonus increases were generally between 0 and 10 percentage points. Similar to the CEO data, no industry group saw a decline in CFO annual bonus targets.

CAP reviewed proxy disclosure to understand how companies are establishing the payout range (i.e., the threshold payout and the maximum payout expressed as a percentage of the target payout) for annual incentives. Most companies that we reviewed identify the minimum payout as zero and do not separately disclose a threshold level of performance. For the 37 companies that did disclose a threshold bonus payout, a payout of 50% of target is the most common percentage. Twenty companies, however, disclose a minimum bonus payout of less than 50% of target which scales down to 25% or lower.

EPS, Revenue, Cash Flow and Operating Income are the most common metrics used in annual incentive plans. Similar to last year, our findings suggest that EPS is used more broadly across industries while Revenue tends to be used in consumer-driven industries.

Most companies use multiple performance metrics in the annual incentive plan. 33% of companies disclose using two (2) metrics, 31% use three (3) metrics, and 16% use four (4) or more metrics.

The use of multiple performance metrics allows for annual incentive payouts to be tied more closely to overall company performance. For example, companies using bottom-line measures in the annual incentive plan will often also include top-line measures for balance. Among CAP’s sample, 36% of “multiple-metric” companies that use a measure of profit (EPS, Operating Income, etc.) also use Revenue. 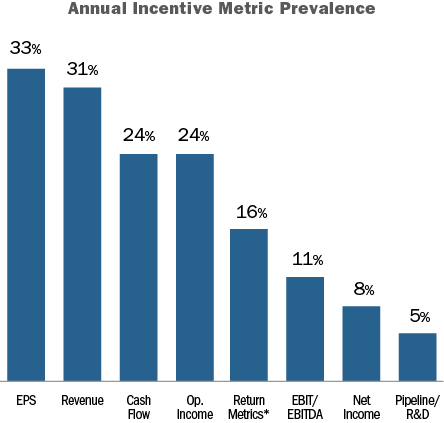 The chart below shows the three (3) most common metrics by industry in 2014:

Nearly all companies (94%) awarded bonuses to their CEO for 2014 performance. Three companies did not pay a bonus to the CEO as a result of company performance: Coca-Cola, McDonalds, and Target.

Overall, the median CEO bonus payout was 114% of target (or 225% of salary, at median). Across industries, bonuses for Pharmaceutical CEOs exceeded target by the greatest amount (146% of target, at median). 3 of the 9 industries CAP surveyed had a median bonus payout of less than 100%: Retail (82%), Consumer Goods (92%), and Technology (95%).

Note: Most companies in the Financial Services industry do not disclose a target bonus for the CEO. For these companies, 3-year average actual bonus was used as a proxy for target bonus.

In our experience, most companies strive to achieve the following with regard to annual incentive plan design:

These objectives can be achieved by continuing to assess plan design in relation to strategy and making minor modifications, such as changes to performance metrics and their weightings, as necessary. Short of a major economic shift or regulatory change, we expect to see only modest changes to annual incentive plan designs.