Compensation Advisory Partners (“CAP”) reviewed 2011-13 Say on Pay voting results among 23 large banking organizations1 each with assets exceeding $50 B. These companies have been subject to regulatory input on compensation program design from the Federal Reserve since 2010 and have made significant changes to their programs based on this input as well as shareholder outreach. This CAPflash reviews the impact of these changes on Say on Pay voting over the past three years.

Each of the 23 large banking organizations has adopted an annual Say on Pay vote, and among these companies average annual support from 2011-13 approximated 90%.

During this time period, only one company, Citigroup in 2012, did not receive majority shareholder support for its Say on Pay resolution. However, a number of additional large banking organizations (3 others in 2012; Northern Trust, Huntington Bancshares and BNY Mellon) received at or below 75% shareholder support. In each of these cases, we observed significant pay program changes in the subsequent year that were in line with changes seen among companies across industries, not just financial services firms that are affected by regulatory oversight. One company in 2013, Comerica, received below 75% shareholder support and as such we expect a similar response to efforts around shareholder outreach and potential program changes this year.

Comparisons of results over the last 3 years generally show a consistent pattern with the majority of banks studied receiving 90+% shareholder support. Further, when comparing 2013 shareholder support levels to the S&P 500 to-date, results among the broader industry yields slightly higher support at median (95% vs. 93%). 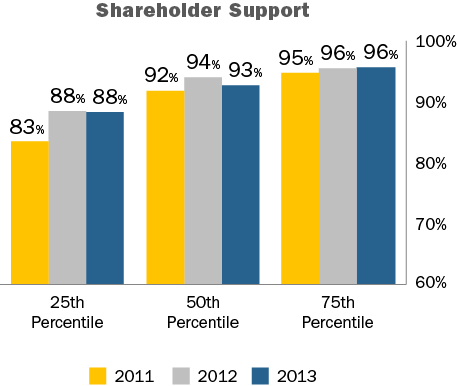 A company only “fails” a Say on Pay vote if a majority of shareholders do not vote in support of the Say on Pay resolution. However, an “acceptable” shareholder support threshold has emerged around 75%. ISS identified 70% as a minimum acceptable level of support, while Glass Lewis prefers 75%. Further, even with results above 70% or 75%, if results are significantly below prior year results, companies will reevaluate their compensation programs. It is important to note that companies and Boards may be subject to reputational risk with “low” pass rates (i.e., approximately 75% or below).

Four companies in 2012 received 75% or lower shareholder support for their Say on Pay resolution – Citigroup (45%), Northern Trust (75%), Huntington Bancshares (61%), and BNY Mellon (58%). Several factors may have led to the low support levels among these large banks, including, low TSR, high pay levels for the CEO or problematic pay practices (i.e., high discretionary payouts associated with poor performance). TSR among these four companies was negative for the one, three and five year periods ending in 2011.

Following the low Say on Pay support level, all made significant changes to their pay programs and conducted enhanced shareholder outreach efforts. In the subsequent year, average support increased by 33 percentage points. In 2013, all four received an ISS “For” Say on Pay vote recommendation (only 1 of 4 did in 2012).

We have observed a link between Say on Pay vote results and company performance, as primarily measured by TSR. Not surprisingly, companies that enjoy high levels of shareholder support for their Say on Pay resolutions tend to have performed better in the prior year and over the latest three year period.

Another significant factor affecting Say on Pay vote results has been the vote recommendations of proxy advisory firms, with lower voting outcomes when companies do not receive support from the proxy advisory firms on their Say on Pay proposals. The factors generally used by these firms include level of CEO pay, program design and the use of non-performance based pay. These factors can drive an “Against” vote especially when in combination with poor TSR results. In 2013, only Comerica received an “Against” vote on Say on Pay from ISS, and they received 61% support compared to 93% support in 2012. In 2012, 3 companies received an “Against” vote recommendation from ISS, and the average support decreased by 34 percentage points. From 2011-13, ISS recommended shareholders vote Against the Say on Pay resolution at 8 of the companies reviewed. Each time the result was less than 80% support.

Given the growing importance placed on shareholder outreach regarding Say on Pay and executive pay programs, some of the companies (i.e., Morgan Stanley and Goldman Sachs) use supplemental filings as an additional outreach tool. In some cases, the large banks file supplementary soliciting materials pushing back on the voting recommendations of ISS or Glass Lewis. While the voting recommendations do not change, companies continue to push back on the proxy advisory firms when they believe they have strong programs.

Financial services firms will need to continue to strike the right balance between pay-for-performance and alignment among varying stakeholder perspectives. This is increasingly challenging for these companies as interests will conflict between shareholders, employees and the Federal Reserve. We expect to continue to see changes as companies balance these multiple constituencies.

Despite significant changes from large banks over the last 3 years (e.g. decreased upside on long-term performance plans, decreased emphasis on stock options or increased opportunity to make ex-post adjustments on deferred incentive awards), Say on Pay results have been strong from 2011-2013. We will continue to monitor how these risk-mitigating features are implemented by these banks as part of the Federal Reserve’s input and their effect on Say on Pay voting results.