Among the 100 company sample, median revenue was $33B, median market capitalization was $37B and median Total Shareholder Return (TSR) was 19% in 2012.

Although shareholder support for Say on Pay has been increasing year-over-year with a significant majority of companies receiving over 90% support, companies continue to regularly review and modify their executive compensation programs in response to shareholders, proxy advisory firms and good governance practices. Consistent with our findings last year, companies continue to modify clawback policies and scale back perquisites. New to our research in 2013, hedging /pledging polices have also gained traction as a result of Dodd-Frank and ISS’ policies.

The Dodd Frank Wall Street Reform and Consumer Protection Act (Dodd Frank) was signed into law in 2010 and will require the following governance practices:

The SEC has yet to release guidance on these areas and the timing of future guidance is uncertain. As such, many companies have taken steps to implement policies on their own.

Dodd Frank requires a broader definition of clawbacks compared to Section 304 of SOX, which applies to CEOs and CFOs. When clawback policies were first adopted by Dodd Frank many companies took a “wait and see” approach; however, with the continued delay in final regulations, companies have been more proactive in modifying their policies.

Nearly all of our research companies – 94 of 100 (94%) – have some form of clawback policy, compared to 86% and 80% in 2011 and 2010, respectively. In 2012, 10 companies adopted a new policy and 11 modified existing provisions. The two industries that saw the most changes to their clawback polices included automotive (45% of companies) and financial services (45% of companies). Typically financial services firms expanded their clawback policies to cover all incentive awards and situations beyond just financial restatements.

As was the case in prior years, a financial restatement (83%) and misconduct (75%) are the most common triggers for a clawback.

Under nearly all policies, it is most common for companies to include the ability to recoup compensation previously granted and it is less prevalent to clawback any future incentive compensation. While the final rules are not expected to include future compensation, we expect companies that already have this provision may continue to include it.

Coverage extends to NEOs in 91% of companies, which is consistent with our findings in 2010 and 2011. Of the other 9% of companies, most define coverage as, “executive officers, officers, senior executives or senior management.” Companies are not required to disclose the level of program detail in the proxy, but we expect most program provisions are more broad-based.

Similar to our findings in 2010 and 2011, less than a quarter of companies indicate the length of the look-back period during which compensation can be recovered after a financial restatement. Of the 20 companies that disclosed a time frame, the most common is 1 year (47% of companies) from date of restatement, followed by 3 years (26% of companies). While not common practice, some companies disclose a different time period for annual incentives and long-term incentives.

While many companies are waiting for the SEC to adopt final rules before making comprehensive changes to their policies, companies have been proactive over the last 3 years in adopting clawback policies. On their own merits, such provisions:

As we await for the SEC to propose final rules, there are several practical challenges to clawing back compensation, such as how to clawback equity gains, how to claw back from former employees and the tax implications of clawbacks.

Hedging and pledging have become shareholder/ corporate governance issues, especially now that ISS views any hedging and significant pledging by insiders to be indicative of a potential failure of risk oversight on behalf of a company’s Board. The Board’s policy regarding these practices is most commonly reflected in the company’s insider trading policy, but it can be addressed through Board resolutions or a stand-alone policy.

Hedging is viewed as a poor practice as it insulates executives from stock price movement and reduces alignment with shareholders. Pledging, in modest amounts, may not be viewed as negatively as hedging, yet can become problematic if there were a significant decline in stock price and which necessitated a sale of shares. Given the potential negative perception of insider hedging and pledging, companies have begun to adopt policies to limit these provisions. Anti-hedging and pledging policies are in place at 91% and 59% of companies studied, respectively; 59% of companies have both policies in place and 32% only have a hedging policy.

An example of typical disclosure of a prohibition on hedging/pledging is reflected in PepsiCo’s proxy disclosure:

“Our insider trading policy prohibits executive officers from using any strategies or products (such as derivative securities or short-selling techniques) to hedge against the potential changes in the value of PepsiCo Common Stock. In addition, executive officers may not hold PepsiCo securities in a margin account or pledge PepsiCo stock or PepsiCo stock options as collateral for a loan.”

Pledging was not addressed in Dodd-Frank per se, and we do not know what the SEC’s position will be in the future. We do however expect more companies to adopt pledging policies going forward given ISS’ 2012 policy statement that identified pledging of company stock by executives as a poor practice.

To improve Say on Pay results, many companies have already have already implemented policies that prohibit hedging and pledging. 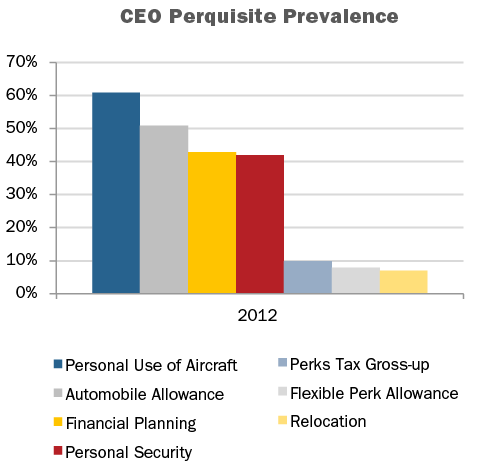 The value of perquisites offered to executives however, has continued to decrease. Median perquisite values disclosed for the CEO and CFO in 2012 were $99,874 and $21,357, respectively. This is a 32% decrease for CEOs and a 70% decrease in value for CFOs in our research. The manufacturing industry had the highest median perquisite values of $319,793 and $69,069 for the CEO and CFO, respectively. 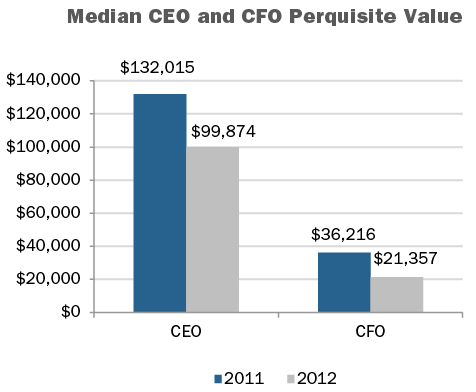 Perquisites tend to be a small proportion of an executive’s total compensation, yet are often highly visible. Shareholders prefer to see pay delivered in performance-based vehicles vs. perquisite programs. Over the past few years, companies have been making changes to these programs in reaction to increased shareholder scrutiny and specific feedback received from shareholders or the likes of ISS or Glass Lewis. In 2012, 9 of 100 companies (9%) disclosed making a change to their perquisite program, a continuation of the trend to reduce perquisites that took hold several years ago.

Occasionally, a company eliminates a perquisite and offsets some of the lost value or reduction through a salary increase or a one-time payment. An example from 2012 is Lear Corp, which disclosed the following:

“Effective January 1, 2012, we eliminated a separate annual perquisite allowance by adding this amount to the base salary of our Named Executive Officers. However, for purposes of determining incentive awards in 2012 and 2013, which are specified as a multiple of salary, the prior perquisite amount is excluded.”

Importantly, Lear excluded the amount of this increase for purposes of incentives, eliminating the potential to provide an even greater, unintentional increase, in total.

The changes in 2012 include two companies eliminating perquisite allowances, one company approving residential security measures for the CEO and one company reducing the allowance for personal use of aircraft for the CEO and CFO. We expect this trend to sustain as more and more companies are responding to the concerns of their shareholders, which can be voiced through a company’s Say on Pay vote.

With Say on Pay votes held annually for a majority of companies, we continue to see companies stay ahead of the curve and track “best practices” in order to satisfy shareholders and proxy advisory firms. This results in reevaluations of company pay and governance practices, and as our research shows, continued modification of perquisite programs and clawback policies, and adoption of hedging and pledging policies. The goal continues to be closer alignment of executive compensation with shareholder interests. We expect companies and Boards to more proactively monitor proxy advisory firm policies and Dodd-Frank legislation when considering changes to pay programs.