Among the 100 company sample, median revenue was $33B, median market capitalization was $37B and median Total Shareholder Return (TSR) was 19% in 2012. As indicated in the charts below, there is significant variation in company size and performance by industry.

Nearly 60% of companies in our study disclose a target total pay position for the Named Executive Officers (“NEOs”). Of these companies, approximately 75% target total pay at median, up from 60% a year ago; indicating that companies are shifting their compensation pay philosophy to a market median standard in reaction to increased scrutiny from shareholders and proxy advisory firms.

Overall, companies did not make significant shifts in the total pay mix in 2012 vs. 2011. CEO and CFO total pay continues to place significant emphasis on long-term incentives (“LTI”); on average, LTI reflects 66% of pay for CEOs and 63% for CFOs. 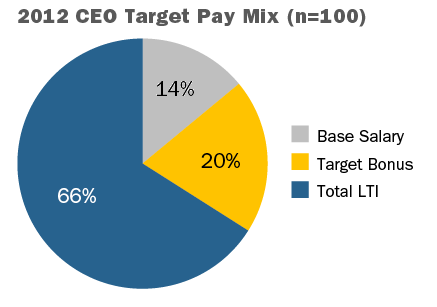 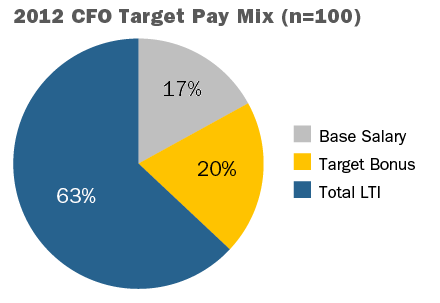 The chart below shows average year over year change in target pay levels for CEOs and CFOs in our study. 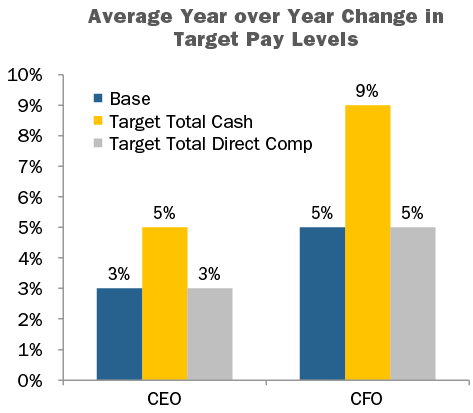 CAP Perspective: We see increases in target pay levels in the low single digits, though the most significant increase is in target annual incentive opportunities suggesting that companies are increasing performance-based pay to reinforce the pay-for-performance link.

Note: Does not include newly hired CEOs or CFOs. Therefore, percentages do not add up to 100%.

Target total cash compensation increased for both the CEO (5%) and CFO (9%) in 2012, mainly due to increases in annual incentive opportunities.

Overall, companies had modest increases in target pay levels for the CEO and CFO, through changes in annual and long-term incentives. The Consumer Goods and Health Care industries saw increases in the 15%-20% range driven by higher LTI opportunity while other industries saw more modest changes in total pay levels. Compensation philosophies continue to migrate to median as companies adopt a more conservative pay philosophy. Overall pay mix for the CEO continues to maintain a strong LTI component (66% of pay) with salary representing smaller component of pay (14%), on average. We expect shareholders and proxy advisory firms to continue to influence company pay strategy, as companies to continue to provide modest increases in target total pay mainly through incentive compensation.