For the 114 company sample, median revenue was $30B, median market capitalization was $29B and median Total Shareholder Return (TSR) was 3% for 2011. As indicated in the charts below, significant variations in company size and performance occur by industry. 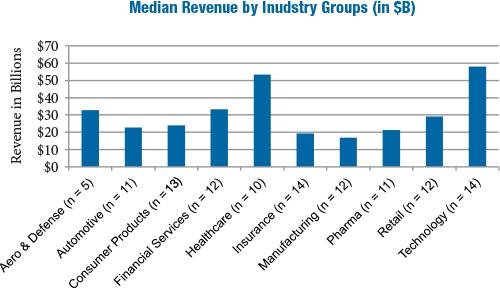 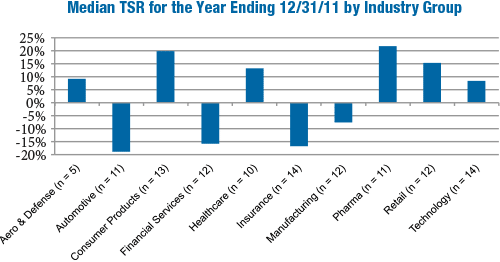 During 2011, companies continued to make refinements to their executive compensation programs to improve the alignment between pay and performance. Compensation opportunities improved during 2011, as many companies in our sample resumed modest salary increases to the Named Executive Officers (“NEOs”), paid annual incentives for 2011 performance that were above target on average, and continued to shift long-term incentive opportunities into more performance-based vehicles.

A few companies (7%) disclosed making changes to their compensation strategy in 2011. Of the eight companies that disclosed changes, five companies lowered their target pay positioning to be at median of the market (vs. above median) due, in part, to increasing scrutiny from shareholders and proxy advisory firms:

Two companies changed the mix between fixed and variable pay; Lincoln National and Prudential Financial increased the portion of total compensation based on variable pay.

66% of companies in our study disclosed their desired competitive pay positioning for the NEOs. Among these companies, approximately 60% target total direct compensation at median. Pay positioning varies among the industry groups. More companies in the Consumer Goods and Technology industries targeted total compensation above median (60% and 67%, respectively), while companies in the Manufacturing and Pharmaceutical industries tend to target pay at median (88% and 80%, respectively).

In 2011, 30% of companies disclosed changes to their peer groups used to benchmark senior executive compensation levels. Many companies refined the peer group to better reflect their size and industry focus. More frequent peer group changes were due to, in part, greater shareholder scrutiny resulting from Say on Pay votes. We suspect that Institutional Shareholder Services’ (ISS) new approach to peer group development for their CEO pay-for-performance assessment also had an impact. 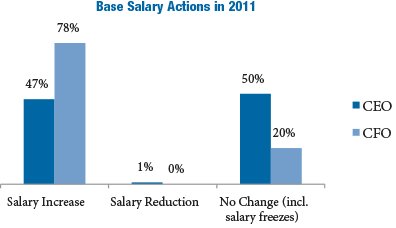 Note: Does not include new CEOs or CFOs hired in 2011. Therefore, percentages do not add up to 100%

The chart below presents the reported AIP changes:

Half of the companies that made changes to annual incentive plan metrics incorporated additional metrics to their plans in 2011/2012. Four companies reduced the number of metrics to focus executives on key criteria most aligned with the business strategy.

Three companies incorporated strategic measures to their annual incentive plan in addition to the financial metrics:

In 2011, two companies, Bank of New York Mellon and Manulife Financial, added risk-based adjustments to the annual incentive plan payouts, reinforcing the objective of minimizing any potential risk-related behavior that could have an adverse impact on the company.

The three most prevalent metrics for each industry group are detailed below: 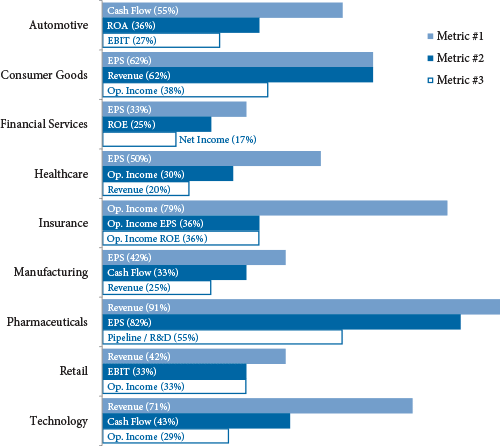 Similar to last year, 96% of companies paid a bonus to NEOs for 2011 performance. A majority of companies (80%) used financial goals to determine annual incentive payouts and approximately 15% have a plan that provides a payout based on some degree of Compensation Committee or Board discretion. At median, CEOs received a payout that was 130% of target in 2011 (compared with 135% in 2010). In the Insurance and Technology industries, the median CEO payout approximated target suggesting performance was near the budget/plan for the companies in our review. Bonus payouts for the CEO’s in the Aerospace and Defense, Automotive, Manufacturing and Pharmaceuticals industries were generally 145 – 160% of target, likely reflecting stronger than expected performance in 2011.

All companies that paid a bonus in 2011 provided all or a portion of the award in the form of cash. 11% required executives to defer a portion of the annual incentive payout, with most of these companies deferring the payout in full value shares (e.g., restricted stock, restricted stock units, etc.) and one company, Morgan Stanley, providing a deferred cash payout. Approximately half of companies with mandatory deferrals are in the Financial Services industry, where it is more common for incentive pay (annual and long-term) to be deferred for a longer time period (i.e., at least 3 years).

50% of companies made a change to their long-term incentive (“LTI”) plan design in 2011 or for 2012. 46% of these companies changed the LTI vehicle mix with a majority providing a greater emphasis on performance-based equity. Approximately 40% of companies eliminated and/or added LTI vehicles to their program. Companies were more likely to eliminate stock options or time-based restricted stock and add a performance share plan. The table below outlines the reported changes:

The prevalence of performance-based equity increased slightly in 2011 and the use of stock options and time-based restricted stock remained relatively flat. Further, companies continue to provide a larger portion of LTI in performance-based incentive vehicles.

Below is the breakdown of overall LTI vehicle prevalence for NEOs in 2009-2011:

Companies use a balanced approach in delivering the executive LTI program. Nearly 55% of companies deliver LTI in the form of two vehicles and 35% use three vehicles.

A majority of companies that made changes to the LTI program shifted a greater portion of LTI to performance-based awards.

Of the 80 companies that disclosed a targeted LTI mix for 2011, the average CEO LTI mix included 46% in the form of performance shares or performance cash vs. 37% in 2010. The portion of LTI delivered in restricted stock decreased from 26% to 20% in 2011, a further reflection of the shift towards performance-based equity. The percentage of LTI in the form of stock options remained relatively flat year-over-year.

The chart below displays the prevalence of LTI metrics for performance-based awards in 2011 and 2010:

49% of companies provide dividend equivalents on time-based restricted stock awards and approximately 30% do so for performance share awards. Of these companies, most pay dividends when shares are vested or earned (71% and 88%, respectively).

Companies are continuing to make changes to their compensation philosophy, primarily through targeting a more moderate (median) market pay position and making refinements to the peer group used for benchmarking. As the economy continues to slowly rebound, a strong majority of companies gave salary increases to NEOs in the past year. And as shareholders and shareholder advisory groups have an increasingly stronger voice in the compensation arena, companies are making notable program modifications that strengthen the pay and performance alignment, through refining annual incentive metrics or delivering more LTI in the form of performance-based awards.