Compensation Advisory Partners’ consulting staff reviewed current director compensation programs for each of the public Fortune 100 companies, generally considered trend-setting organizations. While workload has increased over the past few years, economic challenges and an uneven recovery have increased scrutiny and debate in regard to director pay programs.

At median, pay levels for non-employee directors were flat from 2009-10. Year-over-year, median Total Board Compensation remained steady at $235,000 i.

In line with emerging practices among large companies, use of Board meeting fees was minority practice in 2010, with only 23% of companies paying meeting fees.

On average, the cash vs. equity pay mix was generally consistent between 2009 and 2010. The majority of compensation delivered to non-employee directors continues to be in the form of equity.

CAP Perspective:
Over the next few years, we expect the following trends in director compensation to take place: 1) low to mid single-digit annual increases in Total Board Compensation; 2) more companies moving to fixed cash pay structures; 3) a continued emphasis on full-value equity awards.

On average, an increased portion of 2010 equity-based compensation for non-employee directors was paid in the form on full-value awards, as compared to 2009.

Year-over-year (2010 vs. 2009), equity awards denominated as a fixed value increased in prevalence, as opposed to those based on a fixed number of shares.

During 2010, median committee member compensation was generally consistent with 2009ii. Our research also found that approximately one-third of companies studied pay no committee-specific fees to members of any of the 3 major committeesiii.

CAP Perspective:
We expect the trend away from committee member fees to continue, with the value being rolled into board cash or equity retainers, as many companies now view all Board members as active participants in committee-level work.

At median, additional compensation for committee Chairs remained flat for the Audit and Nominating / Governance committees, and rose by 25% for the Compensation Committee, driven by increased time requirements and scrutiny of executive compensation.

Lead/Presiding Directors and Non-Executive Chairs of the Board 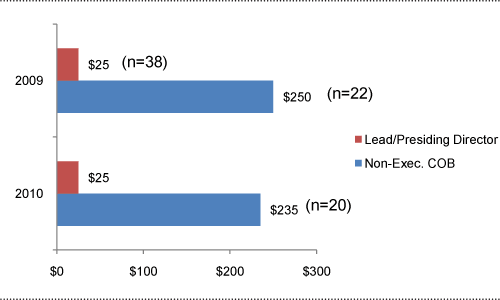 CAP Perspective:
While not all non-executive Board leaders receive additional pay for the role, prevalence of additional compensation for these roles is expected to increase over time. The differential in pay between Lead/Presiding directors and non-Executive Chairs is in line with the typically different responsibilities of each position.

As shown above, there was nominal change in director pay levels and practices year-over-year (2010 vs. 2009) among the largest public U.S. corporations.

It is important for companies to regularly evaluate their overall non-employee director compensation program, or risk falling behind the curve in regards to desired relative market positioning and best in class program design. While reviews should be conducted regularly, it is usually unnecessary for design or pay level changes to take place more often than every 2-3 years.

CAP will release its full report on non-employee director compensation during Fall 2011. The report will provide a detailed analysis of year-over-year changes in pay levels, pay practices and other program design considerations, as well as a discussion of best in class director compensation program setting process.